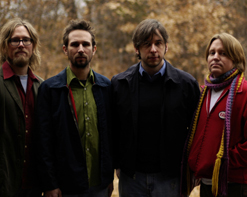 Greetings to all my friends in music video land!! It’s Andy Gesner and the staff at HIP Video Promo with another outstanding band you need to know lots more about! Centro-matic has been humming softly on the periphery of popular consciousness for more than a decade, releasing brilliantly executed, if understated, lo-fi indie rock records to enthusiastic reviews. But even the shyest and most unassuming songwriters start receiving mainstream acclaim if they keep at it long enough. Will Johnson, Centro-matic’s voice and director, is such a writer: it seems like he draws from an unlimited store of gorgeous, unforgettable melodies. Even after ten altogether brilliant Centro-matic albums and countless side projects, he’s still not repeating himself. There’s probably no artist more worthy of national recognition than Johnson, the favorite son of the suddenly-burgeoning indie rock scene in Denton, Texas.

It wouldn’t exactly be right to call Fort Recovery a surfacing, since it’s still raw, gritty, and frequently hushed. But it does represent a rapprochement with sonic fidelity, and if it disregards radio pop polish, it still sounds as powerful as any other recent independent release. Critics have noticed: national publications such as the New York Times and Pitchfork have already raved about Fort Recovery. It’s a fair bet that Centro-matic, who’ve already toured the nation with My Morning Jacket, the Drive-By Truckers, and Ben Kweller, will emerge from the acclaim as an indie rock headliner in their own right.

“Triggers And Trash Heaps”, the lead single from Fort Recovery, might be a bit brighter-sounding than any of the tracks on the 2000 Texas-underground classic All The Falsest Hearts Can Try, an album best described as Denton’s own answer to the questions posed by Guided By Voices and Pavement. But at base, this is the same Centro-matic: rough, distorted guitar and piano, steady bass and drums, Johnson’s aching tenor, and a melody that builds from simple verse phrases into an expansive and indelible chorus. Johnson’s lyrics are as elliptical and suggestive as ever: his hallucinations haunt the corners of the songs and drift through the mixes like ghosts.

Video directors Kris Youmans and Kris Hardy – part of the Dallas collective known as Tactics Productions – are Texas underground stalwarts themselves. Youmans and Hardy have also shot clips for The Paper Chase (Youmans has toured with John Congleton’s band of Lone Star iconoclasts), and have posted much-downloaded footage of Centro-matic’s performances on YouTube. Their appreciation and respect for Johnson and Centro-matic is evident, and it radiates from every frame in the “Triggers And Trash Heaps” video.

The members of the quartet sit in a circle – or, depending on how you look at it, the corner points of a diamond – in an attic or warehouse. There’s no stage, and no stacks of equipment: this may be a performance space of some kind, but Centro-matic isn’t performing. They play the song to each other, but rarely make eye contact, yet they’re each definitely looking at something; points in innerspace, perhaps. Youmans and Hardy light each of the bandmembers slightly differently – the bass player, for instance, is softly outlined, while the drummer is shot head-on. Johnson is often illuminated from beneath, like an alt-rock singer from the mid-Nineties. At times, the camera closes in on him, and his expressions of concentration dominate those frames. Meanwhile, white light floods in from the wide windows, falling just short of the band, half-shrouded in shadows they’ve generated themselves.

We are very excited to be working with Phil Waldorf and all the cool folks at Misra Records to bring you this excellent new clip. We have plenty of copies of Fort Recovery for on-air giveaways, so please don’t hesitate to get in touch. If you need more info, call Andy Gesner at 732-613-1779 or e-mail us at info@HIPVideoPromo.com. You can also visit www.MisraRecords.comor www.Centro-matic.com to find out more about Centro-Matic.