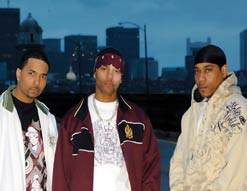 Hey, everybody, it’s Andy Gesner of HIP Video Promo, where we tirelessly champion independent music. And because we do, we have particular respect for local hip-hop collectives, who, against the odds and heavy competition, establish their local imprints as genuine alternatives to corporate rap. That’s exactly what rapper, producer, and entrepreneur Quion has done through QueTone music, and Boston’s rap scene — and all of hip-hop nation — are better for his efforts. Championz is the name of QueTone’s latest project, and, naturally, Quion steps to the microphone to deliver an electrifying verse of his own.

If he and his fellow Championz make it look easy, remember that it wasn’t always so. QueTone may be a successful indie imprint (one that has worked with Beantown Hip Hop legends Terry Funk of Def Jam and Dana Dane! Quion also Produced the score for the Broadway Boxing series which aired on Fox Sport Network while being managed by boxing promoter Lou DiBella) but the musicians behind the label and production powerhouse started with nothing but a dream and the love of music. They catapulted themselves to recognition through hard work, drive, and talent, and songs like “Stay Real” will make sure that the QueTone movement keeps growing. The latest single from Championz is sparkling modern hip-hop; like the best Dr. Dre-produced cuts, “Stay Real” plays equally well in the clubs or on the street corner. The hook, sung by R&B crooner RBG from North Carolina, is infectious, the rapping is deft, and the synth sounds shine. The Championz have stories to tell: about their upbringing, about the block, about everything they’ve been through and overcome. In Quion’s lyrical verse, he admits that he’s tempted to lash out at an adversary — but he reconsiders, and decides to pray for him instead.

That kind of poise under pressure characterizes all of Championz’s material. These guys are roughnecks, but the do not get flustered; they may have troubled pasts, but they’ve got their eyes firmly fixed on a back-stacking future. Andrew Swaine’s crisply-shot video for “Stay Real” shows both sides of the Championz and QueTone experience: the tough back streets of Boston, and the glamour of rap stardom. From the top of the clip, Championz let you know exactly where they’re coming from — that Newbury Street sign isn’t there just for show. But the bright lights of the Boston skyline and the Back Bay are in the distance. The rappers rhyme on a deserted city street, under the glow lights of a strip club, and in front of the plate glass windows of a corner bodega.

But things aren’t entirely grim in Quion’s Boston. The automobiles are sleek and stylish; the clothes are sharp. And director Swaine takes you inside the club, where the rappers are partying with the same confident cool that they approach the microphone with. The tables contain champagne on ice, and beautiful women dance for dollars. And then the emcee gets another call on the cell phone, and the grind begins anew.

It’s a pleasure to be working with Joe O’Grady, Quion and the folks at QueTone music. If you need more info, call Andy Gesner at 732-613-1779 or e-mail us at info@HIPVideoPromo.com. You can also visit Quetonerecords.com to find out more about Championz.