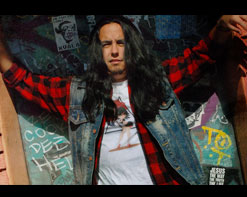 Chase Enriquez is singer/rapper whose song writing approach and live show blends the skillful lyricism of Hip-Hop’s golden age and the raw vocal energy of Rock n’ Roll’s yesteryear with an attack that differs from the ghosts of previous genre-crossing. With his new video for “Light It Up,” Chase takes those two traits and smashes them together into a brilliant amalgamation that thrusts two classic genres into the future.

Originally from San Diego, Chase set up shop in Los Angeles to pursue his quest for greatness. After a brief stint as a front man for a heavy metal band, Chase teamed up with SunNY (So So Def/106 & Park) and his vision for blending rock and rap truly took shape. He’s toured the Southwestern United States tirelessly and released music as singles, EPs and every form of consumption that consumers sought out. “Light It Up” is the newest single, and a sneak peek of the new EP Til the Flame Burns Out: the Muse.

“Light It Up” is more of a demand than a request. With the energy behind Chase’s vocal delivery it’s apparent that sitting on the sidelines for this jam just isn’t an option. As he strolls the darkened Los Angeles city streets and traverses the stage underneath the glowing lights, his focus and determination hone in with the precision of a laser. On cue, a plethora of lighter flames illuminate the screen as Chase pours everything he’s got into the camera. Like a mashup of two worlds his slick raps are complimented by one of the visual hallmarks of rock and roll days past. Buckle up, it’s going to be a crazy ride!

Every time an artist comes across our radar screen that demands our full attention we cannot help but devote our full efforts towards getting them into your programming. Please take a look at this video and let us know what we can do to get it into your playlists! Don’t hesitate to get in touch with Andy Gesner and the HIP Video Promo team at (732)-613-1779 or email us at info@HIPVideoPromo.com . You can also visit http://www.ChaseEnriquezOnline.com/ or http://www.Facebook.com/ChaseEnriquezMusic/ for more info.