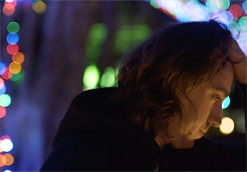 Brothers David and Sebastian Fox were exposed to music at a young age by their father. A traveling musician who gave them their first taste of guitar, he wrote protest songs in his native Argentina and instilled in them a love of a myriad of musical styles. The brothers are trained, touring classical guitarists, playing small theaters across Europe, even sharing the stage with Pavarotti. Chase The Jaguar is all about their other love: stripped-down, catchy indie rock.

“Never Let You Down” is Chase The Jaguar’s first M.E.G. Records single, in conjunction with Florida’s Neurodisc Records, off an upcoming album they are continually in the process of writing. M.E.G. gets its name from the initials of the rock icon Maurice Earnest Gibb, who needs no further introduction. The folks at M.E.G., a label born of the legendary Brothers Gibb, heard what the Brothers Fox could do, and they immediately partnered up. Here David sings with an ethereal world-weariness, insisting that as long as his concerned loved one keeps up the façade that everything’s just fine, and asks nothing of him, he promises he won’t disappoint them.

The lyrics’ isolation is given the perfect visual backdrop by director Lazaro Rodriguez – a city of millions, deserted at the loneliest hours of the night. The band set out across Miami at 3 AM, roaming the empty streets till they found a spot that fit the track’s moodiness. From there, they took a shoot-first-figure-it-out-later approach, grabbing footage on the go and sneaking onto rooftops.

The “Never Let You Down” video was born of Chase The Jaguar’s DIY ethic. Rather than endlessly overthink a treatment, wrangle equipment and wait for someone else to make the video a reality, they stayed true to the simplicity of the song. It’s David’s voice out there almost on its own, with some atmospheric guitars, a pulsing bare-bones beat, and layered, dream-state backing vocals. It’s a natural and entrancing evolution of the chiming, driving rock of their self-titled debut EP. The song is a re-working of a Michael Baker original, which the band made their own by tweaking the arrangement and key.

Aside from playing to fans locally, they’ve already brought their sound to Argentina and Cuba. Festival dates are being worked out nationally and across Europe as the band hammer out their first full-length. Chase The Jaguar got its name from one of the band’s driving principles: never stop going after what means the most to you, no matter how elusive or out of reach it seems.

We’re pumped to be working with Chase The Jaguar, and we’d love to see “Never Let You Down” included in your regular programming and online presentations. We’ll have plenty of Chase The Jaguar merch available, so please don’t hesitate to reach out if you’d like us to send you some for use in on-air contests and giveaways. You can contact Andy Gesner and the HIP Video Promo staff at (732)-613-1779 or info@HIPVideoPromo.com. You can also check out www.twitter.com/chasethejaguar and www.instagram.com/chasethejagaur for recent updates on Chase The Jaguar.