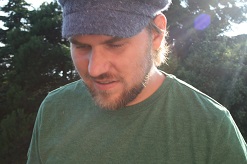 Filmmakers have always been fascinated by the workings of memory. What gets preserved, and what gets forgotten, and how can that be represented on screen? One visual device has proven particularly effective: the selective coloring of particular objects within otherwise black and white shots. This mimics the way our minds reflect on the past – certain things fade to grey, while others remain as bold and vivid as if they happened yesterday. There’s a scientific basis for this popular visual metaphor: color really does enhance memory. “Remember To Forget”, the latest song by the thoughtful Austrian singer-songwriter Chris Beer, is all about recollection, and events that can’t be chased from his mind no matter how hard he tries to dispel them. Justin Lynch’s video for “Remember To Forget” shows this metaphor in action, as the vivid blues and yellows are shown against grayscale backgrounds: those haunting memories of his won’t budge.

This isn’t the first time Beer has tackled a thorny topic in song. He demonstrates an acute sensitivity to the challenges of modern life: he’s addressed loneliness in the era of electronic connectivity, fear of financial ruin, and the need for each individual to take control of his or her own destiny. As pensive as he can sometimes be, his music is also joyous: it’s a glorious and youthful fusion of modern pop, soul, reggae, and heartfelt acoustic folk. While he’s based in Vienna – and has sung passionately about the city – he hails from Graz, a smaller city close to the Slovenian border. Graz is home to several universities, including the Austrian Academy of Arts and Music. Though it’s relatively small, it was named a Cultural Capital of Europe in the early ’00s, and it retains its cosmopolitan outlook. Chris Beer is a true son of Graz (of Vienna, too); he tours across the continent, and his songs are enthusiastically received wherever he travels.

Lynch’s ruminative clip for “Remember To Forget” catches Chris Beer at a moment of crisis. We don’t have to be told: it’s written all over his face as he strums his guitar and sings. He’s lost the person most precious to him, and since he can’t bring her back, he longs to wipe her from his memory. Recognizing the impossibility of his task, he writes a message, stuffs it in a bottle, and casts it out to sea, after which he treads the boards of a wooden path through a dense forest. This is a hushed, introspective clip, a window into a private universe, and a moving illustration of the struggles that happen when our minds simply will not leave us be.

We’re delighted to be working with Chris Beer, and we hope you embrace his new clip for “Remember To Forget” as much as we have here at HIP Video Promo. We’d love to see this video added to your cherished programming and online presentations in a timely fashion, so please give it a look as soon as you can! For more information on Chris Beer, please contact Andy Gesner and the HIP Video Promo team at (732)-613-1779 or email us at info@HIPVideoPromo.com. You can also check out facebook.com/ChrisBeerMusic for the latest updates on all things Chris Beer.