Chris Marsol “3 In The Morning” 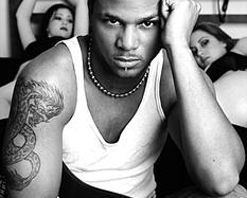 Greetings music lovers! It’s Andy Gesner and the staff from HIP Video Promo, here with a brand new video to heat up the cold nights. For forty years, Bay Area rockers have been pushing at musical limitations and ignoring genre boundaries. Even mainstream acts from San Francisco have gotten in on the action, incorporating psychedelic sounds and experimental passages into otherwise radio-friendly recordings. Chris Marsol is the latest voice from the storied town; he’s a dynamic risk-taker, and as local tradition dictates, his sound defies categorization. Marsol can be as smooth as an R&B crooner, and storm as hard as a headbanger – and often within the same song! Like Terence Trent D’Arby or Lenny Kravitz, he makes music that effortlessly bridges the gap between commercial pop, modern rock, silky soul, and underground funk.

Butterflies, Lipstick, and Hand Grenades, his independently-released debut, is a bracing, provocative, and wildly enjoyable listen. Marsol is a forceful singer and player (his six-string work is particularly reminiscent of Kravitz at his best), and on track after track, he proves willing to take chances. It’d be wrong to call Marsol’s music psychedelic” in the classic 1960s sense, because it’s nothing if it isn’t current and fresh – but the songs on Butterflies, Lipstick and Hand Grenades do contain trippy instrumental departures and ambitious, unexpected musical choices. “3 In The Morning”, the latest single from Marsol, is crowned by a twinkling synthesizer lead. The solo rises from distorted guitars and pounding drums like a curl of smoke; it’s both fascinating and surprising. It’s the perfect finale for a song about late-night phantoms and haunting dreams. “Seems like anything is possible as long as I’m asleep”, he sings, and when he says “anything”, he doesn’t just mean good things.

The gauzy, dreamlike, and ominous feel continues in the “3 In The Morning” clip. Here, Marsol’s talents are complemented by those of another pioneering and aesthetically courageous Californian – filmmaker Samm Styles. Styles is probably best known as the director of Black August, a heralded and uncompromising biopic of Panther Field Marshal George Jackson. That movie took chances, too: it was challenging, deeply symbolic and referential, and it strongly implied that Jackson was a victim of corrupt prison authorities as well as the times. Styles’s work for Chris Marsol isn t quite so topical, but it’s every bit as intense, and the mystique is just as thick.

Chris Marsol is a natural subject for film – he’s handsome, expressive, and charismatic. He’s also having dreams that demand depiction: some are sexually provocative, some are confusing, and some are downright unsettling. All of the late-night reveries in the “3 In The Morning” clip seem driven by his worries about his girlfriend’s fidelity and intentions. Whenever he envisions his arrival home, he catches her in a different act: with another man, dressed up in dominatrix gear for his pleasure, and even hovering over a hospital table with his heart (literally) in her hand. Played with deadpan allure by Marsol’s own real-life girlfriend, the character messes with the singer’s head. He tosses and turns in bed, arms flailing over his head; only the morning sunlight can rescue him from himself.

We are thrilled to be working with Clear Label Records and the genre-bending Chris Marsol to promote “3 In The Morning.” They have also given us a heavy supply of the new CD Butterflies, Lipstick and Hand Grenades for contests and on-air giveaways, so don’t hesitate to get in touch if you can give this deserving artist some extra love within your programming! If you need more info, call Andy Gesner at 732-613-1779 or email us at info@HIPVideoPromo.com.