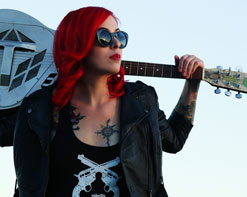 With the release of the Godspeed & Guns album, NYC’s Christina Rubino brings a new feel to a classic genre. The album, produced by Jerry Farley with a host of amazing projects under his belt, is lush with addictive progressions, soulful vocals, and an alternative edge. The record boasts the aesthetic of indie rock anthems. Though the songs are diverse from one another, there is a glue that holds it all together, much like a concept album would. Most importantly, the record never loses sight of the emotional platform great songs are built from.

Christina knows her way around a great song, too, whether from her time in Violator, the all-female Depeche Mode cover band, or proved by the abundant press (The Nashville Music Guide, Indie Artist Alliance, Pop Dose Magazine, The Examiner) she received for her first album Alive From The Scrap Heap. With the title track of Godspeed & Guns, we see and hear a classic story of our shadow selves. Guest guitar player Johnny Phillips (Burlap to Cashmere) drives the song home with his soulful latin guitar licks.

“Godspeed & Guns” is a magnificent video that weaves multiple layers of emotions into a complex, powerful storyline. At the heart of the video is Christina and her sister Dolores. The two are as tight as can be, like two peas in a pod. They hit the road in their classic ride (with the appropriate 3VILL license plate), and it’s not long until they find themselves on a violent path of self defense and retribution to a variety of abusers and rapists.

Though it initially feels like a high octane thrill ride with a nod to Thelma and Louise, it is eventually revealed that Christina’s existence is simply a lifelong figment of Dolores’s imagination, and Dolores has been the sole culprit to each and every one of her crimes. Like many songs on her album, “Godspeed and Guns” finds it’s inspiration in the effects of early childhood trauma and the sad, difficult ways that it can manifest itself later in life. Christina Rubino has managed to take this trauma and find a cathartic release of it all. To quote the seminal indie rock group Nada Surf, “Maybe this weight was a gift, like I had see what I could lift.”

We’re all going wild over Christina Rubino here at the HIP Video Promo offices and strongly encourage you to check her out! Her crossover appeal is immense and would fit in a multitude of programming. Please contact Andy Gesner and the HIP Video Promo staff at (732)-613-1779, email us at info@HIPVideoPromo.com. You can also visit www.ChristinaRubino.com or www.Facebook.com/ChristinaRubinoMusic for more info on Christina Rubino.