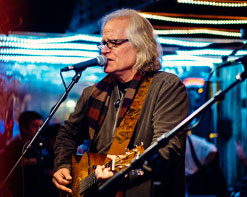 Chuck Murphy is an award winning, Billboard charting singer-songwriter from Palmdale, CA, originally hailing from Bloomington, MN. He has had three #1 hits on SoundCloud® with over 22 million listens to his song, Falling Star, which also held the #1 spot on SoundCloud’s country chart for six weeks and the #1 spot on SoundCloud’s folk and singer-songwriter chart for two weeks. The hit song, “Falling Star,” has been nominated for the 2016 Hollywood Music in Media Award (HMMA) in the music category Americana/Folk/Acoustic.

After 16 years of working together writing songs and producing music, the EP Peace Be With You has been a labor of love for Murphy and his co-producer Jeff Silverman (www.palettemusic.net). A movie-ready remix of the track, “Peace Be With You” has been submitted for consideration for the 59th Grammy Awards, and Murphy’s band, Big Coyote, has put love and passion into this project with every note they have played.

The “Peace Be With You” video is a warm, inviting performance piece that showcases Chuck and the band in their element. Set up in a cozy country studio, the wood panels and large beams in the ceiling create an atmosphere that fits the no-frills approach to Chuck Murphy and his band. Fans of shows like Live From Daryl’s House will appreciate the intimacy and natural camera work at play here. The simple approach leaves plenty of room for the song to be the star of the show, it’s message sure to resonate.

In order to really understand the message, Chuck has also given us an in depth behind the scenes video. Chuck explains how the motivation of “Peace Be With You” originated as a song of sibling rivalry and quickly became a larger message of tolerance and understanding. Using scenes of protests happening across the country to reinforce the point, Chuck’s message that it’s crucial to realize we are all much more alike than different really galvanizes in front of our eyes.

It’s a great privilege to be a part of the Chuck Murphy team and the message he is spreading. We sure can use it! Please contact Andy Gesner and the HIP Video Promo team at (732)-613-1779, email us at info@HIPVideoPromo.com. You can also visit www.ChuckMurphy.net for more info on Chuck Murphy.