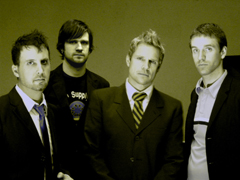 Warm weather salutations to all of my friends in the music video community! It’s Andy Gesner and the staff from HIP Video Promo with another excellent video. We’re all Jersey loyalists here, and it’s no secret we’re partial to our local heroes. But we’ve got a special place in our hearts for The Churchills – as New Jersey expatriates, they are now strongly identified with the Brooklyn independent music scene. For years now, this four-piece has epitomized the best of our independent aesthetic, redefining DIY ethic and cultivating mainstream success all on their own. Without bowing to trends, this band continues to write timeless melody after timeless melody, and perform their great songs with consummate skill, integrity, and attention to sonic detail.

The Churchills’ earnest brand of songwriting has certainly received mass exposure. Fans of prime-time television programs are probably very familiar with the foursome’s sound – whether they know it or not. Even before the release of their debut album Magnifique 400, The Churchills had already found themselves devoted fans at the major television networks. Michael J. Fox was so impressed with the band’s sound that he featured them on three episodes of Spin City. From there, the group’s relationship with television networks has only deepened – regular viewers of ER, Everwood, Third Watch,Summerland and Scrubs have heard the distinctive Churchill guitar crunch and vocal harmonies during some of those shows’ most moving scenes.

It’s not surprising that these programs have seized upon The Churchills as an appropriate musical accompaniment for their dramatic stories. This is a pop band with a cinematic sweep – one that makes an immediate emotional impact. Ron Haney and Bart Schoudel have voices that sound as romantic and inviting coming through a tiny, compressed television speaker as they do on a car stereo at top volume.

On The Odds Of Winning, those voices have turned bittersweet. Having to put this record on a back burner while helping other artists actualize their goals meant a drawn out recording process and a more melancholy final product (but countless bands in the NY/NJ area now have incredible sounding indie release thanks to the studio wizardry of Haney and Shoudel). Romantic fatalism has always come naturally to The Churchills, but it’s never been as clearly foregrounded as it is here. On “Do You Want Me To Go Away”, Haney pleads in his most despairing voice for compassion and solace from some indifferent lover. Within the depths of this record cars drive off bridges, time and money slips away, questions are left unanswered. The lead off single “Sometimes Your Best Isn’t Good Enough” finds the narrator on the edge, contemplating his own inadequacies, trapped in the limbo of an indeterminate relationship.

The clip for “Sometimes Your Best Isn’t Good Enough” is similarly disturbing in its ambiguity. The band is shot in a swiftly-moving convertible as it speeds down the streets of New York City at night. Street lamps and brake lights make thick electric brands on the screen, and at times, the car and its occupants seem to blur as well. Haney and Schoudel smile at the camera at times, but for the most part, they sing their desperate lyrics straight faced and unrelenting; possessed. As their auto passes through the streets, the images accelerate, streaking over the bridge like falling satellites.

At times, the car appears to be following a young woman. She’s running along the road as fast as she can. There’s another figure in pursuit, too; a man who is clearly chasing her, doing his best to keep up. At first, she looks graceful and self-possessed – but as the clip progresses, it becomes apparent that she’s laboring. Are the Churchills, so blithely singing their ominous words in their streaking car, haunting her or are they merely acting as narrators in a love story gone wrong? Is the man behind her looking for reconciliation, or something else? She comes to rest in a deserted car park, and hides among the pylons, struggling to catch her breath. The man tailing her has lost her here, in this darkened lot. He looks around him, too exhausted to hear her hidden heartbeat.

It’s a great pleasure to work with The Churchills, as we have been both fans and friends of the band for years! After a jaunt in Japan this Summer, the boys will be touring the US, and will be available for interviews, in-studio performances, and video ID’s. If you need more info call Andy Gesner at 732-613-1779, or email info@HIPVideoPromo.com. You can also visit www.RedEyeUSA.com to find out more about this incredible quartet.