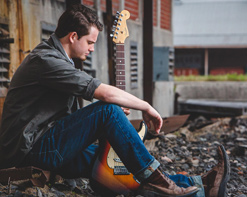 Clay Melton is a twenty-one year old American musician, songwriter, and recording studio session artist. Clay began achieving success at the age of fifteen when the Dallas International Guitar Festival proclaimed, “Clay Melton named one of the TOP 10 Guitar Players in Texas under 20 years old!” after a superb on-stage performance. Teenage guitarist Clay Melton would then become a much sought after guitarist and move on to perform on the main stage at the Texas based Conroe Crawfish Festival not once but three years in a row.

Key influences that were sharpening Clay’s interest in guitar included such greats as Led Zeppelin, The Beatles, Jimi Hendrix, and Stevie Ray Vaughan. Audience members comment that Clay Melton Band reminds them somewhat of John Mayer and the Foo Fighters. However, all agree that Clay Melton Band presents a guitar-driven pop-influenced style that includes a blistering Texas-blues influence. Noted KPFT radio show host the Blueshound shared the following with his listeners, “Very talented… What a monster career he has ahead of him.”

The new video “Home” is the perfect showcase of all of the talents that drive the Clay Melton Band. Taking place in the spacious, gorgeous Sugar Hill Recording Studios, it features Clay and the band performing a rousing rendition of the song. It begins with Clay seated, acoustic guitar in hand opening the song with a sparse performance. Once the song kicks in the full band attacks the music with a reckless abandon. Don’t let the three piece lineup fool you, this trio brings a wall of sound bigger than most bands twice their size. Their individual expertise is on full display, proving once again that a video can be simple in concept but explosive in execution.

It’s a pleasure to bring this young artist channeling the rock and roll greats to screens far and wide. We’re always available to provide whatever we can to help solidify its presence in your programming, so please get in touch! Call Andy Gesner and the HIP Video Promo team at (732)-613-1779, email us at info@HIPVideoPromo.com. You can also visit www.ClayMeltonBand.com for more info on Clay Melton Band.