Cleo Alexandra “Who Can It Be Now” ft. Rick Springfield 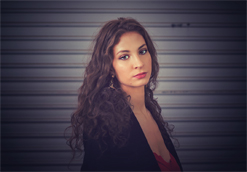 Cleo Alexandra is an indie goddess with flair. Inspired by theatrical and powerhouse acts like AC/DC, Stevie Nicks, Janis Joplin, Lady Gaga, and Kurt Cobain, she taps into modern and powerful sounds that are brutally eye-opening and unforgivingly raw. The stories she tells in her tracks contain bursts of emotion in a rare display of her true soul.

Born in the small town of Armidale with big city dreams, Cleo Alexandra is a true Australian. Her first musical vision came to her on her fifth birthday when she was given a small notebook and began writing short poems. She kept developing her skills as a singer/songwriter and soon picked up a guitar and keyboard. In high school, she was recruited to be a model but, after a few years, left that world as she found the path of music to be more alluring. Hooking and capturing her audience, she joined forces with six-time Grammy-winning American producer Keith Olsen and producer J.J Farris to release her debut single “Criminal” in 2016. She captured the eyes and ears of many who were eager to uncover more from the songstress, to which she has unraveled herself for her debut self-titled EP set to come out January 22nd, 2019.

The first taste of the EP is “Who Can It Be Now”, a cover of the classic 80s hit by Aussie group Men At Work, written by Aussie, Colin Hay, and now featuring duet vocals by the legendary Aussie Rick Springfield (who was known for his hit “Jessie’s Girl”). Mysterious, moody and full of intrigue, director Tom Bishop and Cleo herself do an excellent job setting up the tone of mystery. Dark and haunting, the production and vocal delivery emphasize the eeriness of the lyrics while adding new dimensions. With her rope of pearls acting as a choker, the listeners hang on her every word as she reworks and reinvents a classic. Adding and subtracting dimensions of the original song, her take on the track honors the original while creating her own sound.

We’re honored to be working with Cleo Alexandra, and we hope you include the clip for “Who Can It Be Now” in your regular programming and online presentations. We’ll have plenty of Cleo Alexandra merch available for on-air contests and giveaways so don’t hesitate to get in touch. For more information on Cleo Alexandra please contact Andy Gesner and the HIP Video Promo team at (732)-613-1779 or email us at info@HIPVideoPromo.com. You can also check out www.CleoAlexandra.com for more info or instagram.com/cleo_alexandra_/ and facebook.com/CleoAlexandra.Official/ for recent updates on Cleo Alexandra.