Cobra Starship “Snakes On A Plane (Bring It)” 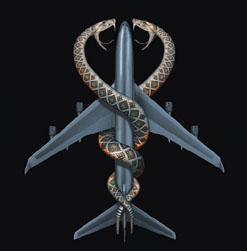 Hello to all my music video programming cohorts! It’s Andy Gesner and the staff here at HIP Video Promo HQ with a video and song that we predict will end up being the summer anthem of 2006. Unless your Internet access has been out for the better part of 2006, you’ve heard about Snakes On A Plane. The upcoming New Line motion picture – slated for August release – has been the subject of rampant weblog speculation, enthusiasm, and anticipatory parody. Star Samuel L. Jackson’s well-publicized refusal to countenance a name-change for the project has since passed into Hollywood legend. It’s also well known that the soon-to-be-must-see movie has recently been re-cut, and made even more outrageous. No matter how it’s greeted by critics (and our guess is that all professional ironists will welcome the film with open arms) Snakes On A Plane is likely to be remembered as a watershed for the marketing of movies through new and participatory media. Audiences used Internet platforms and shoutboxes to make their feelings about the film clear, and the studio listened.

Is this the dawn of a new kind of Hollywood receptivity? Cobra Starship – the new band helmed by Midtown singer Gabe Saporta – might argue that it is. Saporta had named his project before he heard of Snakes On A Plane, but once he did, he found the serendipity too sweet to ignore. The singer knew he had to get a song into the movie – and a few phone calls and one scalding-hot track later, Cobra Starship w/ The Academy Is…, Gym Class Heroes, and The Sounds was taking flight with the summer’s most talked-about flick.

Don’t expect Saporta’s new act to sound like his old one, though. Midtown may have roared with abandon, but Cobra Starship incorporates beats and electronic elements into its indie rock. The debut album will be released in mid-August to coincide with the takeoff of the New Line film – but “Snakes On A Plane (Bring It)” is a pretty clear indication of where he wants to go. While the song is fun as hell, Saporta doesn’t play it for laughs; instead, the “snakes” in the title are duplicitous record company executives and shady businesspeople. Travis McCoy of Gym Class Heroes emcees over the bridge (and the voice of Samuel L. Jackson is heard delivering an Internet-mandated curse of all things reptilian in flight), but “Snakes On A Plane (Bring It)” is a rocker to the core with a chorus big enough and sturdy enough to stand up to the blissed-out expectations of the summer moviegoing audience.

The soundtrack to Snakes On A Plane will be co-released by New Line Records and Pete Wentz’s Decaydance Records. The Fall Out Boy bassist, who owns the sub-imprint of Fueled By Ramen, makes a guest appearance in the “Snakes On A Plane (Bring It)” clip – but he’s hardly the only member of the indie rock royalty to appear here. McCoy shows up too; as does Maja Iversson of the Sounds and William Beckett of The Academy Is….. Both Iverson and Beckett are also key components of the song itself, delivering the uber-memorable pre-choruses and choruses, respectively. Dressed in suits, the musicians use a subterfuge to smuggle snakes past the baggage check at an airport. (We know this because the unattended x-ray machine reveals slithering vipers in their briefcases). Watched by a suspicious Samuel Jackson, they fake out the security guards and file into seats in the waiting room until their seat numbers are called. They board the plane, the clip ends – and the movie begins!

It is our pleasure to be teaming up with Kevin Kertes at New Line Records on this compelling new music video project, complete with an All-Star cast sure to grab your viewers’ attention. It is not often that a song sinks it’s fangs into our entire office from the very first listen, but like a python on a rat, “Snakes On A Plane (Bring It)” wrapped itself around our eyes and ears from the moment we saw the video! You can count on us to have plenty of copies of the Snakes On A Plane soundtrack available for all of your giveaway needs. If you need more info, call Andy Gesner at 732-613-1779 or e-mail us at info@HIPVideoPromo.com. You can also visit www.NewLineRecords.com to find out more about Cobra Starship and Snakes On A Plane.