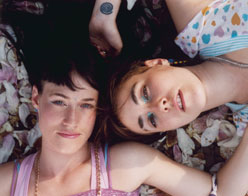 Hi everyone! It’s Andy Gesner and the staff from HIP Video Promo, back with another clip from a new duo that is causing an international sensation. Sisters Bianca and Sierra Casady make music that doesn’t sound like anything else on earth. Childlike, strange and glowing, their songs feel like missives from a tight and twisted parallel dimension: one of dollhouses, weird fairy-tales, and nascent sexuality. As CocoRosie, the NYC-by-way-of-Paris siblings have been astonishing audiences since 2003. And if listeners thought their debut – the luminous La Maison Mon Reve – was not of this world, they’d better brace themselves for the intergalactic sound of Noah’s Ark.

When the Casady sisters began their musical collaboration two years ago, they’d been living apart: Bianca in her New York City flat, Sierra at music school in Paris. Moreover, since they’d been adults, their lives hadn’t intersected too frequently. So part of the CocoRosie project became a rediscovery of childhood closeness. At times, their music does sound like the product of collaboration between visionary, gifted, yet somewhat troubled kids. (The cover of Noah’s Ark, depicting three unicorns having sex, is suggestive of CocoRosie’s unsettling hybrid of the innocent and the pornographic.) Both Sierra and Bianca slip easily into childlike, slightly feral vocal inflections, write lyrics that belie a candid perceptiveness, and follow playground rhythms. And they round out their mixes with harps, school-room piano, reverbed toy instruments, carousel noises, and distant chimes.

La Maison Mon Reve caught the musical underground off guard. The contrast between Sierra’s classically-trained and near-operatic voice and Bianca’s feline, bluesy vocal scrawl caught attention, as did the sisters’ lyrical audacity. They sang frankly about race, religion, social politics and sex, and populated their dreamlike narratives with weird characters. Throughout, the album had the elusive quality of a reverie – a memory dancing just out of grasp. Noah’s Ark pushes further into the mist: twelve more wildly impressionistic tales, discharged with the same combination of delicacy and savagery. Spirituality and childhood sexuality continue to obsess the sisters, and they’re not afraid to animate the figures of Pocahontas and Mike Tyson to make raw resonance. CocoRosie’s courage has attracted them a cadre of hardcore followers, including several famous fellow travelers in the pop avant-garde. Antony (of Antony & The Johnsons) and Devendra Banhart are big fans – and they show their appreciation by contributing evocative vocal turns to Noah’s Ark.

The visual aesthetic favored by the Casady sisters is almost as far-out as their music. Wearing clothing that seems a hybrid of Native American traditional and summer camp arts-and-crafts, the duo plays up gender-ambiguity: Sierra bunches her long hair up into a high, imposing crown, and Bianca draws on a faint moustache. Theirs is one of the most unmistakable and unforgettable looks in indiepop, and in the video for “Noah’s Ark”, it’s front and center. The women are shown flying through space: leaping like kids, singing and dancing, and confronting the viewer with their strange and oddly fascinating faces and bodies.

Kai Regan’s luminous clip opens in outer space – here, hand-drawn David stars and skulls shine and twirl. They’re shaky-line drawings done in blue, as if traced by the hand of a little girl. A rainbow erupts from Bianca’s brow; Sierra stares back at the camera, enraptured. The sisters inhabit this childlike fantasia fully, playing basketball, riding on a swingset, engaging with stuffed birds, lying together in a tent filled with clothing (and an amplifier!). In one memorably trippy shot, Bianca rides a gigantic shoe down a river, and toward a waterfall at the end of the world. There, floating in the ether, is Sierra’s singing face, outlined in stars.

We are very excited to be teaming up with Sara Tolbert and the staff at Touch and Go Records to bring you yet another compelling clip! We will have plenty of copies of Noah’s Ark and other CocoRosie goodies for on-air giveaways. If you really dig this band and need more info, call Andy Gesner at 732-613-1779 or e-mail us at info@HIPVideoPromo.com.