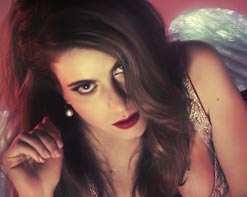 With a name as cool as Cole Phoenix and a dance-pop track as hot as “UFO”, you might think this beautiful young Australian artist might be singularly-focused on the breaking in the music industry. But you’d be wrong. This girl is firing on all cylinders. Besides being a singer/songwriter and a producer, Phoenix is also an actress, a screenwriter, an author, and a director whose credits include the fun and futuristic clip for her latest single. HIP Video Promo is very happy to introduce Cole Phoenix and her irresistibly catchy “UFO” to audiences across the USA.

Extremely bright and a natural performer from a young age, Phoenix took leading roles in musicals throughout her childhood, but it wasn’t until after graduation that she considered writing her own songs. She’s already released two critically-acclaimed albums–2010’s Wild Love and 2012’s Cole Phoenix–and now she’s gearing up for her newest release, She’s On Fire. Combining classic dance vibes and modern production values, lead single “UFO” is an exuberant powerhouse that’s already making its way up the charts. And with the release of its music video, it’s only headed further in that direction.

A retort to “relationship invaders” who seek to break up the party, “UFO” takes the position of the strong girlfriend defending her rights to her man. Taking place on an orbiting “space club” in the far-out year of 2088, Phoenix plays both leads: the angelic heroine (with tattooed wings), and the evil seductress “Cleo.” Demonstrating some of her acting chops, Phoenix gives each character a distinctive identity. (Although, both are undeniably easy on the eyes.)

Directed by Nicolas Jacobi (alongside of Phoenix) and edited by Jesse Franklin (Justin Timberlake’s “Lovestoned” and Gnarles Barkley’s “Crazy”), this clip has the style and sass to match Phoenix’s sexy dance anthem. For more information on this exciting artist and the video for “UFO,” please contact Andy Gesner and the HIP Video Promo Staff at (732) 613-1779 or email us at info@HIPVideoPromo.com . You can also visit www.OfficialColePhoenix.com or www.NobleNoBull.com for more info.