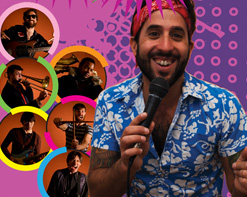 COLIN SCHILLER AND THE REACTIONS

Time to turn those serious blues into a smirk programmers! It’s Andy Gesner and the HIP Video Promo staff, here with an artist whose mantra is simple: “Life’s too serious… rock n’ roll shouldn’t be.” Colin Shiller & The Reactions brings together classic sounds with his staple brand of nerdy glam to mix up the zany concoction that is “Dizzy,” a song that is as mainstream as it is the furthest thing from it in the best way possible.

In a musical climate where artists often play insecure or to cool for school, Colin Schiller & The Reactions are the anti-matter of the hipster Brooklyn universe, in which they coexist. Schiller is a bit of a throwback to the days of Huey, Costello, and The Boss with just the right twist of light hearted nerdiness. “Dizzy” is tasteful and simple glam rock at its finest, featuring the feel good vibe of the 80’s to get you away from the not so feel good reality of life. Hailing from Brooklyn, New York and being front and center with the cutting edge hipster musical trends, Schiller knew his only chance of mental survival was to create a show he would want to see. And that is why you won’t find any trendy fads here, besides explosive dynamic hooks that have been trending since the start of pop music. “Dizzy” is laced with Springsteen guitars and vocal echoes, recorded at the famed Vacation Island Studios (MGMT, Gang Gang Dance, Lemonheads). The band has gained great notoriety amongst their peers, but also some seriously crowning moments with the critics! Colin Schiller and The Reactions are part of The Deli Magazine’s “Top 300 Indie Rock Bands” thanks to their fantastic debut record Endless Holiday. Although the band only hit stages in the last year, they have already rocked CMJ Music Festival, Dewey Beach Music Conference, and popular New York clubs like The Mercury Lounge and The Knitting Factory.

The “Dizzy” video centers around Schiller as he wakes up from his slumber, donning a one piece pajama outfit, to do one thing – attain the love of a pinup chick. This isn’t just any average girl either, it’s Bravo’s Project Runway finalist Kenley Collins, cast as the object of Schiller’s affection. He hilariously stalks her all day long, appearing everywhere she goes as different characters, in a Master Of Disguise sort of courting method. Eventually he wins her over as she appears at his door the following morning with a love note. Although it takes the entire duration of the clip for Kenley to see Schiller for the alluring heartthrob that he is, the rest of the viewers will be hooked on him and his flavorful brand of pop rock in the first several seconds.

We love working with artists that offer something new to the table, while honoring the classic gods of rock, which is why we are so thrilled to bring you this upbeat and star studded clip from an artist that truly deserves your playlist attention. We also have copies of Endless Holiday available for you to check out, so be sure to let us know if you’d like some! If you need more info, call Andy Gesner at 732-613-1779 or e-mail us at info@HIPVideoPromo.com . You can also visit www.ColinSchillerandtheReactions.com  to find out more about Colin Shiller & The Reactions and any show dates near you.