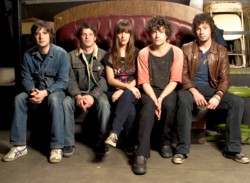 Hello to everyone in our fine music video community! It’s Andy Gesner and the staff from HIP Video Promo, back with another clip from a new band that’s exciting audiences across America. You may know Yep Roc Records from their tremendous work with legendary alt-rock artists such as Nick Lowe, Robyn Hitchcock, and The Go-Betweens. But not all Yep Roc bands have such lengthy pedigrees. The North Carolina label has signed some intriguing younger acts, too – most notably The Comas. On their third album, Conductor, the tuneful five-piece from Chapel Hill shows itself to be a legitimate heir to their adventurous labelmates.

The key is the songwriting. The Comas understand how to craft fuzzed-out pop hooks, and they build their tracks the old-fashioned way: strong, involved melodies, clever (though never jarring) chord progressions, and heartfelt, literate lyrics. If singer and principal songwriter Andy Herod comes off as glum and maybe a little bitter –Conductor is, at base, a break-up record – his melancholy never swamps the project or drags it down. Behind him, the band crests and swells like the Outer Banks sea, riding torrents of processed six-string and bright, inviting synthesizer. The album peaks with the towering, Bowie-ish “Tonight On The WB”, a song that is simultaneously a plea for acceptance and a broken-hearted kiss-off. (It’s particularly poignant to those aware of Herod’s romantic history, which includes a stormy relationship with Michelle Williams, a prominent actress on that network).

“Invisible Drugs,” the lead single, is a straight-ahead stomper with nods to mid-Eighties Brit psych-pop and grungy stoner rock. Herod and co-guitarist Nicole Gehweiler provide the classic, grinding Jesus & Mary Chain riffs, and the powerhouse rhythm section drives the song forward with the unswerving authority of an eighteen-wheeler. The lyrics are evocative stream-of-consciousness utterances, heavily medicated, vaguely frightening, and catchy. It’s no surprise that Robert Christgau, himself no stranger to the smoking bowl, named “Invisible Drugs” a choice cut in his Village Voice Consumer Guide column.

Bradley Scott’s sly clip for “Invisible Drugs” finds the band between the white pillars of a warehouse. Light pours in through high industrial windows as the stationary camera captures both the sunwashed concrete floor and the dark, crossbeamed ceiling. During the first twenty seconds of the video, The Comas set up at lightning speed, filling the empty space between the cylinders with microphones, drums, and amplifiers. Once the song begins, the clip slows down to a normal pace – but then it’s the camera that starts gravitating uncomfortably. It flips on end, pans back for a second, then zooms in. Herod attempts to chase the lens a little, but ultimately it’s Gehweilier who takes action. After ascertaining the problem, she leaves her position, grabs the camera, adjusts it with a smile, and then returns to her guitar.

Because we’re betting that you won’t be able to get enough of The Comas, HIP Video and Yep Roc are also including the clip for the aching “Tonight On The WB” on this reel. This weird, hallucinatory video nods to Dark City, apocalyptic fiction, andDawson’s Creek, and then blasts off into weirder territory from there. The Dawson’s moments come courtesy of star Michelle Williams, who performs her central role with requisite teen-movie wonder. But in the background, as she chases snowflakes and beckons boys, there are helmeted storm troopers prowling a war-torn urban landscape. It all ends with a thermal detonation large enough to engulf the whole city in light and heat – the uncompromising, explosive energy of Hollywood romance.

We’re absolutely thrilled to be working with Steve Gardner and everyone at Yep Roc Records to bring you these two incredible clips. We have copies of their brilliant LP Conductor, which includes a collection of videos strung together to form a compelling mini-movie, that will be available to you for on-air giveaways! If you need more info, call Andy Gesner at (732) 613-1779, or email info@HIPVideoPromo.com. You can also visit www.YepRoc.com, or www.TheComas.com to find out more about this amazing new band