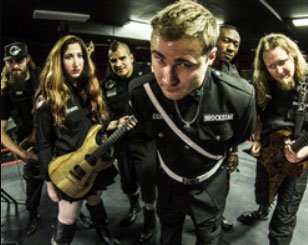 Corvus is one of Arizona’s finest metal bands. They’re a great live act and are proficient songwriters, and have completed six albums in less than five years time. Heavy riffs, melodic solos, great vocal melodies and, what most fans consider the best aspect, lyrical imagery, are what make up the elements of this unique band. HIP Video Promo is pleased to introduce the positively radiant video clip “Breathe.”

Their music is played on radio stations throughout the southwest U.S. and internet broadcasts from the United Kingdom. They have toured nationally with bands such as Trapt, Mushroomhead, American Head Charge, and Hed P.E. Corvus has recorded six full-length albums in the short span of five years—the most recent album Never Forget was released in January of this year. This six-member band includes brothers Brock, known for vocals, and Josh Brown who plays bass. Guitarist Matt Fournier, rhythm guitarist Izzy Bevins, keyboardist Jamil Muhammad, and on drums David Henry, make up the other members of this powerfully driven band.

Rushing with heavy-metal elements and a strong energy, the clip “Breathe” offers music fans a taste of what Corvus has to offer. The video portrays the band in a no-holds-barred live-performance setting where the gloves have been taken off; being that the backdrop is a boxing ring, the raw energy is alive and potent showing just how “to the bone” this band can get. The band looks sharp and sounds even better in this epic rocker. “Breathe” is a track that resonates the uniqueness of this band and sets the tone for what is to come.

Watching Corvus perform keeps viewers on their toes, and “Breathe” is a perfect example of what this Arizona metal outfit is all about. For more information on these exciting new artists, please contact Andy Gesner and the HIP Video Promo staff at (732)-613-1779 or email us at info@HIPVideoPromo.com . You can also visit www.Facebook.com/TheRealCorvus/.