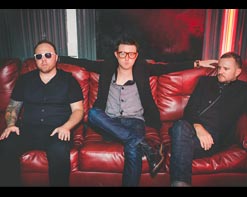 Cosby. Two brothers. One band.  A combination of musical talent across a wide spectrum, Cosby was created in Richmond, Virginia in the winter of 2012. After years of playing separately, brothers Chris and Chip Cosby joined to combine their talents in songwriting, guitar, piano/keyboards, and vocalization.

Contributing each of their influences of 80’s synth and pop with modern indie dance, Brit-pop and chillwave, Cosby soon found that they could combine their similar tastes and musical abilities to create something new, albeit with a twist: a melding of relative musical experience and their relative bloodlines.

The culmination was their debut album, In Flight. This debut album by the band provides a luscious blend of dream pop aesthetics, indie dance/synth, and progressive textures. Cosby is that band that brings a sound of familiarity, but refreshing take on the music that keeps you returning and begging for more. They’ve followed up In Flight with the new single “Heartracer,” which continues their goal of reinventing modern day pop music by infusing it with earlier sounds.

The “Heartracer” embraces the same sense of throwback as the music of Cosby. The video begins in front of a classic arcade game with a young man temporarily distracted by the pretty lady at the bar. Upon realizing her smiles and waves were not meant for him he dolefully turns back to the arcade game and his absolute frustration soon transports him into the game itself. The next thing we know he is working his way through various video game levels complete with 8 bit graphics representing his “power” and a countdown timer to beat this level. After overcoming obstacles like a difficult bartender or a belligerent bar patron, he makes his way to the boss of the level. We won’t give anything away, but let’s just say it’s not the type of boss you’d expect! The Cosby brothers provide the soundtrack, rocking out on top of the bar and decked out in neon glasses, a Casio key-tar, a Kramer guitar, and other odes to 80’s pop culture. This vibrant clip is a delightful bit of nostalgia and a powerful piece of contemporary pop music.

It’s our distinct pleasure to be working with a band that champions synth pop with as much passion and talent as Cosby. We’d love to get you anything you may need to include this video in your programming, so please don’t hesitate to get in touch. For more information please contact Andy Gesner and the HIP Video Promo at (732)-613-1779 or email us at info@HIPVideoPromo.com for more info.