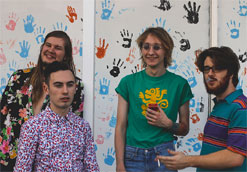 “Couch Jackets” sounds like an alligator’s eating us,” reads the explanatory note on the Little Rock, Arkansas quartet’s Bandcamp page. Fans of the band have become accustomed to this sort of irreverence – these are funny guys, and they lead with their personalities. Yet it’s not just a joke. Listening to Couch Jackets can be like entering a whirlpool: songs don’t behave the way you expect them to. They come at the listener with manic energy; they twist and turn, shiver and shake, and no matter how playful they seem, they always carry with them a whiff of danger.

We suppose that if we were asked to be particular about it, we could try to classify Couch Jackets. Given their ambition and the idiosyncratic nature of the music they make, it’s fair to call them a progressive rock act. Their emphasis on texture and love of experimentation aligns them with the neo-psychedelic movement, and their supple grooves are redolent of classic ‘70s pop. There’s even a hint of country music somewhere in the mix. But we don’t think we’ve ever heard a band combine its influences in quite the same way. Go To Bed, the group’s most recent set, was made in Nashville, and it’s the fullest realization of their visionary sound yet committed to record. It somehow manages to sound more polished than their prior recordings while preserving the primal chaos and sense of fun that has always distinguished the band. We have no idea how they’ve pulled off this trick. Like so much about Couch Jackets, their methods are shrouded in mystery.

Just as the band has developed a singular sound, they’ve come up with a visual aesthetic that’s wholly theirs – and that matches the music perfectly. For a still-new band, Couch Jackets have made a lot of videos, and they all display the group’s inventiveness, imagination, and sense of humor. Consider, for instance, the clip for “Don’t Think Just Breathe”, which manages to satirize obsessive news-watchers, cooking shows, reality television, and the act of eating dinner. If the members of Couch Jackets (and their friends and associates) appear to be having an absolute blast doing these clips, that’s because they are. They’re sending their messages in a musical and visual language of their own invention, and it’s only a matter of time before everybody gets the transmission.

The “Pillos N Rillos” music video shows us once again the band’s ability to entertain. Pulling from their greatest strengths, they have cultivated a visionary that operates like an encore. The video opens with a black and white shot as a man with a mission gives a homeless man (the band’s lead singer) pennies, which raises his false sense of importance to drive his false ego to kill. Comedy is hidden between the transitions as a pie-eating contest turns deadly. The man returns home victorious but is quickly met by karma as the men stare blankly at him with unjustified hate for some fun with whipped cream. This contrast and dry humor propel the Couch Jackets to not only be musicians but also comedians. The video closes with the wife breaking out of her husband’s bizarre delusion as she simply shrugs it off as the viewer processes the visual- vividly entertained and wanting more.

It’s an absolute blast to be teaming up with Couch Jackets to promote the “Don’t Think Just Breathe” and “Pillos N Rillos” music videos! We hope you embrace these clips as much as we have and consider including them in your regular programming and online presentation in a timely fashion. Rest assured we’ll have plenty of Couch Jackets merch available for on-air/online contests and giveaways so don’t hesitate to get in touch. This musical tsunami tours relentlessly, so if you’d like to go see them live when they visit your market this summer, reach out to us and we’ll make it happen! This is a band that’s impossible not to root for, so if you need more information on Couch Jackets, please contact Andy Gesner and the HIP Video Promo team at (732)-613-1779 or email us at info@HIPVideoPromo.com. You can also check out www.instagram.com/CouchJackets, www.facebook.com/CouchJackets, or www.Twitter.com/CouchJackets for recent updates on Couch Jackets.