Cousin “The Girl I Knew” 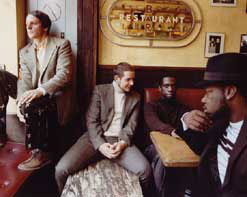 A big warm hello to all of my highly regarded music video programming friends! It’s Andy Gesner and the staff from HIP Video Promo with more intriguing music completely worthy of your attention. If you think you know what New York City independent rock music sounds like, think again. Cousin is here to turn your expectations upside-down. They’re quintessential NYC underground artists, for sure – playing all of the expected hip clubs and parties – but they don’t sound like anybody else currently rocking stages in Gotham. Pulling from sources as disparate as late-period Steely Dan, Queens of the Stone Age, and Todd Rundgren’s seminal garage-rock band The Nazz, Cousin pieces together a pop songwriting sensibility that’s at once immediate and edgy. There’s an intoxicating haziness that blurs the edges of the music, and draws listeners in. The influences are apparent, but the feel and the vibe are both unique.

Frontman and lead guitarist Raze Regal purrs his stories of late-night encounters and romantic disintegration in a conversational voice that simultaneously recalls Hendrix at his most blunted and wry Donald Fagen. Cousin’s rhythm section – bassist Peter Klein and jazz-trained drummer Raymond Mcnaught – are a sure hand with a sophisticated groove, but they can rock out with uncommon fire. Producer and synth player Daniel Collas – having garnered acclaim for his production work from both MOJO and Uncut magazines – has sat in with Jon Spencer and Matt Verta-Ray, and he brings some of their art-damaged blues sensibility to the group’s dancefloor-friendly sound.

“The Girl I Knew” is an ambitious, heady fever-dream of a pop song – a sexy, slightly-drunken swagger through a crowded, sweaty rock club. It begins and ends with a sneer: a chanted recapitulation of a central “chicken in the basket” Southern guitar lick sung slightly off-mic by the entire group. But when the band gets going, “The Girl I Knew” becomes an undeniable rocker, concealing heartbreak and disappointment behind a wall of cotton-candy distortion. After a false ending that hangs like an unanswered question, Cousin re-imagines the main riff as a funky throwdown. Mcnaught and Klein, content to lay back early on, take over with a swinging bottom end and an irresistible beat.

It’s the sort of song that announces the presence of a new band with authority, and in a place as star-studded as Brooklyn, earns a young band some famous friends. Actor Brendan Sexton III (Empire Records, Welcome To The Dollhouse, Boys Don’t Cry and too many other cool independent films to list), has signed on to manage the band, and he’s also seen prominently in the “Girl I Knew” clip. Better yet, he’s brought along the ridiculously gorgeous Paz de la Huerta (Cider House Rules, Riding In Cars With Boys) to co-star, while Mark Webber (Broken Flowers) and Norman Reedus (Boondock Saints) chip in with roles as well. Director Josh Mond of BorderLine Films weaves the members of Cousin into the ensemble, and tells a story that will be instantly familiar to anybody who has ever logged time in a smoky, drug-addled indie music club.

Regal plays an old boyfriend of de la Huerta’s. It’s immediately apparent that things didn’t end well between them; she’s got a new man in tow (dressed like a Wall Street interloper) and she’s game to show him off. Blurring the line between sultry exhibitionism and insidious violence, they make out in front of Regal and the rest of the crowd. The Cousin singer spends the clip addressing the microphone regretfully, and reeling outside of the club’s bathrooms. Mond’s camera perfectly captures the strange, mind-altering effects of jealousy and public humiliation amidst the sweep of the stage lights; hopping crisply and unnaturally from shot to shot, repeating images, then focusing suddenly on telling details. As Regal alternates between a rueful, hushed delivery and garage-rock screams, Mond picks up the pace, cutting ferociously, and spinning around the club in a whirl of excitement, bewilderment, and betrayal.

Here at HIP we are very excited to be working with this soon to be national buzz band and Brendan Sexton III to bring you this incredible clip! If you need more info, call Andy Gesner at 732-613-1779 or e-mail us at info@HIPVideoPromo.com.