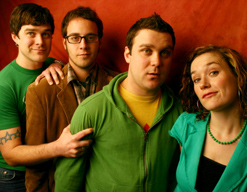 Hey rock fans! It’s Andy Gesner and the staff from HIP Video Promo, here with a clip from a band that’s impossible not to pull for. Sweet Weaponry didn’t sell a million copies, and nor was Cruiserweight invited to appear on a late-night network talk show to promote it. But to a devoted crowd of independent rock fans, the Texas quartet’s debut album was both a revelation and a reason to celebrate. Here was no ordinary pop-punk band – Cruiserweight broke writing conventions and employed unusual song structures, keeping listeners on their toes throughout. Yet the songs were as infectious – and as energetically performed – as any by their Warped Tour peers. And Stella Maxwell has to be one of the most endearing frontwomen in rock music: she’s plainspoken, straightforward, razor-sharp, and witty, and she delivers Cruiserweight’s songs with verve and unflagging confidence.

They’ve also shown they’re pretty compelling in front of the video cameras, too – and not merely because the musicians are nice to look at. The clip for “Permanent Things” – one of the highlights of Sweet Weaponry – is a remarkable shot-by-shot parody of Journey’s classic loading-dock video for “Separate Ways”. Kay Hanley of Letters To Cleo appears in the video, but the real star of the clip is Stella Maxwell’s astonishing Steve Perry hairdo. Cruiserweight has also plugged in and played in a haunted hospital (in the clip for “Yellow Lights”), the surface of the moon (their fiery cover of Tom Petty’s “American Girl”) and onstage at Emo’s in several inspired and much-viewed live spots. A Cruiserweight performance clip on that legendary Austin stage is, in a way, just as telling and conceptually rich as the narrative videos they’ve shot: for years, they’ve been a must-see attraction in Texas.

Non-stop touring has introduced the quartet’s songs to audiences all over the country, and anticipation has been building forBig Bold Letters, their follow-up to the much-loved Sweet Weaponry. “Balboa”, the lead single, is already a concert favorite: it’s got an instantly-memorable chorus, an irresistible guitar hook, and a pretty uplifting message. Appropriately for the singer of a band named after a weight class, Maxwell identifies herself with Rocky, and tells the listener she’s throwing punches and taking names. She’s feisty in the clip, too, rollerskating along the sidewalks of a suburban development and aiming her challenge straight at the camera. But while her talk is tough, her style is disarming: she wears a red polka-dot dress and puts flowers in her hair, and she smiles, nods and dances as she sings. It’s a sunny day in the suburb, and the band sets up in a backyard ringed by a high picket fence. All the houses look similar, and there’s nobody out on the road. But Cruiserweight shatters the small-town gentility with an electrifying on-street performance; later, the musicians leap up and down on a trampoline, strumming and singing as they do. A butterfly lands on a child’s bicycle and flies away; the high sun casts shadows across the curiously still street; where there’s a gate, Stella Maxwell pushes it open and charges into the day.

We are stoked to be working with Adam Rubenstein and the crew at Doghouse Records to promote the new “Balboa” clip. Don’t forget to check out Cruiserweight on tour through the end of November, so don’t hesitate to get in touch if you want to schedule video IDs or on-air interviews. If you need more info, call Andy Gesner at 732-613-1779 or e-mail us at info@HIPVideoPromo.com. You can also visit www.DoghouseRecords.com, or www.Cruiserweight.com to find out more about Cruiserweight.