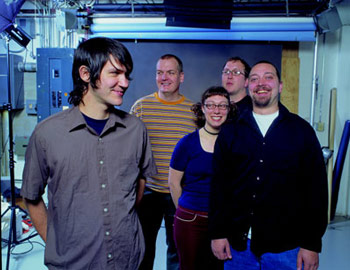 One of the best feelings in the world is knowing that your work is appreciated. After many years of meticulously honing their songwriting and musical skills, 2003 was, finally, the year of Cursive. Unafraid to present musical and lyrical content that resides firmly “outside the box” , Cursive’s eclectic musings have caught on, with the band now selling out 1000 seat venues from coast to coast. How does this unique band from Omaha, Nebraska win the hearts and minds of the indie rock elite and kids in every suburb alike? It’s a passionate journey fueled by an “in the trenches” DIY aesthetic second to none, gutsy vitality, and a genuine appreciation for their fans that keeps this persevering quintet fighting the good fight.

“Some Red Handed Sleight of Hand”, the new Cursive video from The Ugly Organ CD (Saddle Creek) chronicles the band doing what they do best – putting on a grippingly intense, high-energy live performance. The Cursive stage show is a spectacle – a jaw dropping, sweat soaked soiree of majestic proportions. What other band places a cellist right smack dab in the middle of the stage? “Sleight of Hand”‘s sinuous, over-the-top frankness is abrupt and unrestrained, featuring leader Tim Kasher’s fervent requests to forgive him for his transgressions while simultaneously urging his audience to sing along with him and his Ugly Organ. Cynical about everything from the music business to religion and feeling an uncontrollable urge to expunge his guts for public display, Kasher unloads vocally and bangs on his own keyboard while his bandmates whirl around the stage in a riveting performance. This compelling clip shows the human, humble, and rockin’ side of Cursive not seen in their first video, “Art is Hard”.

Shot live while on tour in Japan and directed by Jun Kawaguchi, the “Some Red Handed Sleight of Hand” video features rapid fire edits, multiple camera angles and intercuts stills by photographer Hidetomo Hirayama of each of the band members (Tim Kasher on vocals, guitar and organ, Gretta Cohn on cello, Matt Maginn on bass, Ted Stevens on guitar and Clint Schnase on drums). The video was shot at the Shinjuku Liquid Room in Shinjuku, one of the most popular night life areas in Tokyo.

Here at HIP Video we are always thrilled to work with our friends at Saddle Creek. They inspire us greatly because they are remarkable people of passion, showing leadership and keen vision. It is these qualities most coveted by the “big-label” based music industry – as they ponder how they too can create the same enviable and often times elusive state of buzz that comes so easy to the folks and artists at Saddle Creek.

We want to make sure all your Cursive needs are attended to in a timely fashion. We have copies of The Ugly Organ for on-air giveaways and the band will be on tour this spring and available for video interviews and video IDs. Please get in touch with Andy Gesner at 732-613-1779 or e-mail info@HIPVideoPromo.com to find out more about Cursive.