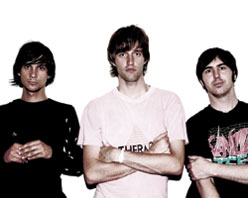 Hello, all my good friends – it’s Andy Gesner and the staff from HIP Video Promo, back again with another superb clip from an act you’re sure to be hearing plenty about in the future. They’ve already toured their native country with Bloc Party, and Franz Ferdinand counts them as one of their favorite bands. They hail from Australia, they’re based in Britain, they recorded in France, they spent July rocking through the continent and Scandinavia, and the cover of their album features an image of New York City. They’re Cut Copy, and their brand of international synthpop is setting dance floors and satisfying the dayglo joneses of big-Eighties revivalists everywhere landing them a spot on a US tour with Franz Ferdinand beginning later this month.

The notoriously fickle and tough-to-please British press has gone wild for the band: Bright Like Neon Love, the debut album, garnered 4/5 in the NME, and earned them a pick of the week in the Guardian. “The Melbourne trio flash an effervescent, sun-dappled cool”, raved Time Out London, likening Cut Copy to Human League and Chic. Multi-instrumentalist and singer Dan Whitford’s deft writing has been compared to that of Air, and his expressive voice to Bernard Sumner’s. An American invasion seems inevitable.

When it happens, we expect digital hipsters, dance junkies, and casual U.S. pop fans alike to make like their Euro counterparts and fall head over heels for Bright Like Neon Love. Not since Daft Punk’s Discovery have we heard an electro-pop album with such obvious mass appeal. Judicious use of growling guitar and live drums adds edge to Whitford’s gorgeous synthscapes; sticky analog bass, high satellite noises, and twinkling ear candy create sonic interest while never interfering with the grooves. Whitford’s first love is the techno-disco he grew up with, but he’s not so wedded to the dancefloor that he won’t throw a real rocker like “Going Nowhere” at the listener just to keep her on her toes. This is a party record of the best kind: a soundtrack to a thoroughly international get-down, politely hedonistic but rarely out-of-control, rife with pleasurable surprise and novelty, satisfyingly sophisticated but never bewildering. You’re invited.

“Saturdays”, the first American single, is a club cut so infectious that it demands to be played again and again. (Whitford agrees, reprising “Saturdays” in a rock version one track after the single cut on Bright Like Neon Love.) Like most Cut Copy songs, it surrounds an intoned, mantra-like vocal by Whitford with big beats, digital processing, and glossy synthesizer and guitar hooks galore. It’s the most febrile song on an album that already shimmers with heat.

The rock snob’s knock on techno and dance projects is that the sound of these records, while exciting, is invariably two-dimensional. But like most of the best electro-pop from Air to Daft Punk, Cut Copy’s music reveals greater and greater depth the longer you listen to it. The video for “Saturdays” plays with this expectation: both the band and its surrounding landscape are rendered as paper dolls. The members of Whitford’s group emerge from the receiver of a gigantic red telephone, and move through a world of animated magazine cut-outs. As you’d expect, the landscape is filled with signifiers of the go-go Eighties – boom-boxes, old synths and VCRs, lipstick advertisements reminiscent of the cover of Rio – and the bandmembers shake and shiver like the protagonist of A-Ha’s landmark clip for “Take On Me”. Like the A-Ha singer, the musicians in Cut Copy seem to be pushing against the boundaries of their own physical dimensionality: choppily and unsuccessfully, perhaps, but still with the fire of rock and roll energy. Objects in the “Saturdays” video only seem to be flat: really, they overlap each other, knock each other over, and break loose from their assumed boundaries. There is real depth here – it’s just not the kind we’re accustomed to.

We’re very grateful to be working with Brian Long and all the folks at Modular Records to bring you this enticing new clip. We will have copies of Bright Like Neon Love for on-air giveaways. The band will be touring throughout September and October with Franz Ferdinand and TV On The Radio. You can imagine the buzz surrounding this highly anticipated tour! Please let us know if you would like to set up a video interview or ID while they are out on the road, or if you just want to see them live, please don’t hesitate to get in touch. If you need more info, call Andy Gesner at 732-613-1779 or e-mail us at info@HIPVideoPromo.com.