Da Professor "I Love MySelf" 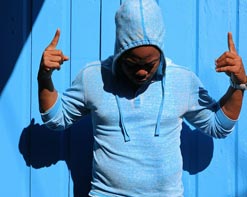 Meet Da Professor – and feel his emanations of love! Born Julio Todd, he hails from tropical Kingston, Jamaica – a lush and almost “magical” island country. Julio was given the name “Da Professor” because of the energetic magnetism he possesses. His innate love and sensitivity towards others led him to share his compassionate gifts and abilities – and from ever since he can remember, he’s offered sage advisement to all those who are around him. Ever since he was a young boy, Da Professor has been like a flowing waterfall of fresh vibes and new sounds that percolate and bubble and, now, for many years, make his fans just plain feel good. With the new video for “I Love Myself” he shows off exactly what has made him such a hot commodity on the modern musical landscape

While in Jamaica, he followed his path to further develop his interest in music, and his abilities in songwriting and performance vocals, performing at various schools, churches and community talent shows. In 2005, Da Professor immigrated to the United States with his family, and his career began to take off shortly thereafter, touring as the lead singer for the legendary band, Inner Circle. He also worked alongside Grammy winning super star and producer Don Corleone. Together they composed and placed songs with world-famous artists such as; Protoje, Ky-Mani Marley, Ken Boothe, J Boog, and many more. His first gold album placement, “Diversity”, was with the world-renowned German reggae star, Gentleman. Da Professor wrote, produced, and was featured on his single, “Nothing a Change”. In 2013 he was invited to work with Tessanne Chin, winner of the nationally-televised talent show “The Voice”, and Da Professor composed her single: “Call on Him”. Later in 2013, Da Professor was introduced to record label owner and publisher, “Spiky”, who made her mark in the industry with the Platinum single “I Luv This Shit” produced by Knucklehead. Together they are developing a totally new international fusion style brand and sound for Reggae music.

The first taste of that collaboration is the inspirational single titled “I Love Myself,” which we are very pleased to share with you today. As a true humanitarian as the co-founder of Stop The Abuse Foundation, Da Professor works tirelessly to make people aware they they can not only just stand by, but they can actually help to put an end to domestic violence. “I Love Myself” is an empowering anthem and the video shows Da Professor sharing his love with others who are taking those first steps towards making their lives better and stepping away from abusive and harmful situations. It’s not an easy subject to discuss, and it can be difficult to watch, but in the end the video is a positive reaffirmation that all of us have the ability to make the right choices for ourselves. Feel the vibe, and wave your hands in the air to show you love yourself!

All of us here at HIP Video Promo are incredibly proud to be working with Da Professor and Spiky to deliver such a powerful message of hope and strength. We would love nothing more than to see you support this video and its message, so please let us know what we can do to make that happen. Please contact Andy Gesner and the HIP Video Promo team at (732)-613-1779, email us at info@HIPVideoPromo.com for more info on Da Professor.