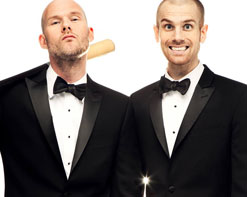 Dada Life is one of most beloved and ambitious duos in the EDM genre. Lzzy Hale, lead singer of Halestorm (another HIP Video Promo alumni), is at the top of the hard rock/metal genre, with her signature wail leading the charge. Instinctively, these may seem like very odd bedfellows, but one listen to the new collaboration
“Tic Tic Tic” and it’s immediately apparent that the guys of Dada Life have welcomed a worthy new ambassador to the nation of Dada Land.

With a constant musical flexibility and a tongue in cheek approach, Dada Life has been rewriting the rules and blazing their own trail for close to a decade. They have topped iTunes charts, appeared at all of the top festivals like Ultra, Coachella, Electric Zoo and more, and even hosted their own insane events like The Groove Cruise and the upcoming Dada Land Before Time. They’re always in pursuit of pushing not only the boundaries of their scene, but their own personal musical limits.

Enter Lzzy Hale. She has cut her teeth onstage for years as the frontwoman of Halestorm, finding a perfect balance of grit and melody in her delivery. Though the crossover and collaboration between their genres has been very limited, “Tic Tic Tic” is prepared to open the door to a new standard. Like pickles and ice cream to a pregnant woman, this combination is deliciously satisfying for a crave we never knew we had! PopMatters says “Tic Tic Tic” is a song that “crackles with live energy and primal rhythm likely to turn the dance floor into a massive pogoing maelstrom of raised arms and blissed out faces.”

When it came time to create the visual, that seemed to be their cue for inspiration. “Tic Tic Tic” is a video that captures the extreme energy created by the collision of Dada Life and Lzzy Hale and puts into a stunning, aggressive, and intense music video. A mob assembles in a dark room, lit alternately with single blue, red, and yellow lights. It’s clear that they are worked into a frenzy and in serious need of a release. Young and old, leather and lace, this groups spans the demographic horizon. Just when the intensity reaches a boiling point, a pile of stuffed animals finds its way to the middle of the mob and the release of all that pent up energy can finally commence.

We’re incredibly excited to bring you and your viewers another exceptional video from Dada Life! We’re certain you will enjoy this clip mightily, and please don’t hesitate to be in touch to let us know what we can do on our end to help get this into your programming. Please hit up Andy Gesner and the team at HIP Video Promo at (732)-613-1779 or email us at info@HIPVideoPromo.com for more info. You can also visit www.DadaLife.com.