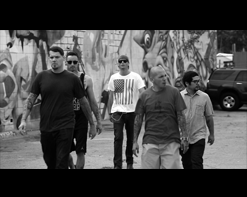 For generations people have spoken of the “American Dream” and what it means to them. Many people believe it goes back to “life, liberty, and the pursuit of happiness”. Others believe that it means creating a better life for their children than they ever had for themselves, while thriving in the life their parents made sacrifices for. For LA-based Day Above Ground, the American dream is slightly more complicated than that, and as they have recently learned, it’s not always what it seems.

Just three weeks ago Day Above Ground was a hard working and popular independent band from the LA scene that was steadily expanding their fan base and name recognition. They’re also a band that likes to have fun with their music and themselves, and expressed these feelings in their song and video “Asian Girlz”. The bold and daring, tour-de-force video about their love for all things Asian – including the culture, food, & females – hit the internet and took off like a rocket becoming one of the fastest rising viral videos of all time. All of a sudden these five regular guys were no longer your average band.

But there was a backlash from some who didn’t appreciate the edgy humor and satire. And despite their efforts to explain that everything was done for fun they were roundly vilified and they voluntarily pulled the video after 6 days, accumulating 1.5 million views that were still climbing fast.

Day Above Ground have thick skin and can easily roll with the punches that comes with the turf, whether it be criticizing their looks or sound, or anything that happens to most artists on a daily basis. What they couldn’t tolerate was the mislabeling of the band as racist, misogynistic, and having hate in their hearts. With many of their words falling on deaf and unresponsive ears the band decided they would respond the most natural way they know how; through their music.

They hit the studio armed not only with their instruments but also with their pens, paper, and video cameras. Director Michael Steinberg was behind the lens capturing every moment. The goal was to write, record and videotape the new single “American Dream” in one day. And not only did they accomplish hat, they managed to produce a hard hitting message about what the American dream means to them and how they believe it is slipping away. What started as a musical ode to ideas of second chances and freedom of speech, morphed into a timeless look at the current state of the union with drones in the sky, wiretaps on our phones, and the NSA reading everything we do on the internet (they’re watching us right now). The video captures the band in their essence, giving it all in the studio, and it’s easy to sense the seriousness and sincerity of their message. It may have all started as a satirical joke, but it has morphed into a much bigger conversation about each and every one of our own “American Dream”.

For more info, please contact Andy Gesner and the HIP Video Promo staff at (732)-613-1779 or email us at info@HIPVideoPromo.com .