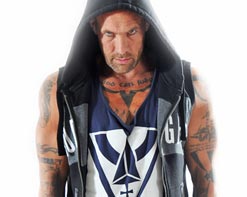 The world of dance music is about to become well acquainted with the name Damon Hess. With calculated precision, the fast-rising, multi-talented Sheffield, UK-based DJ/producer skillfully crafts music that will immediately get your adrenaline moving and your blood pumping. In other words, he’s fire-hot and he’s more than ready for the spotlight. With an inherent appreciation and understanding of rhythm and beat, the seasoned veteran of the UK music scene and co-founder of the highly successful, internationally renowned Sheffield rockers, LittleCrazy –where he contributes his talents as the rock solid drummer and passionate backup singer/songwriter– Hess knows good music and what it takes to get the people shaking their hips and feeling good. Kicking 2015 off with a bang, his brand new single, “Want You To Stay,” which features the magnificent vocals of singer, Soph Yates (radio presenter on Real Radio XS 106.1 FM), is precisely what the mainstream dance clubs have been craving.

With a surplus of dance music producers battling it out on the musical landscape these days, the competition is fierce and it’s harder than ever to get noticed. No matter what way you slice it, you really have to bring something special to the table. Fortunately, it’s super apparent that Damon Hess has everything it takes to stand above the rest. Fearless and unquestionably on par with all of today’s top producers, his tremendously refreshing sound combines the irresistible qualities of popular bass- thumping, soaring acts like Dash Berlin, Avicii and CAZZETTE (to name a few), while absolutely possessing a huge, hard-hitting sound that’s no doubt all his own. Hess has his formula down pat and it shines so brightly on “Want You To Stay” that you may just require shades on the dance floor.

Making good on her flawless record, director Tristan Ayling, who handled LittleCrazy’s epic 2012 music video, “Sisterly,” once again delivers a perfect visual counterpart to a great song. Taking the viewer on an ethereal, exhilarating trip that won’t soon be forgotten, the delicately-executed video has everything you’d want: shots of exceptionally beautiful bodies, out-of-this-world imagery, and of course, people dancing their hearts out and having the time of their lives! What else could you ask for… flawless.

Damon Hess is currently putting the finishing touches on his debut solo album, entitled About Time. The album will feature the vocals of an array of established guest vocalists including Amy Louise “Redd” Aldred (singer/songwriter achieving No.2 in the Hip Hop chart with “I’m A Day Dreaming,” which features Akon and Snoop Dog), Lee Glasson (The Voice 2014 semi-finalist), Jessica Steele (The Voice 2014 contestant), Jason Quainoo (singer/songwriter), Imogen Blue, Becky Castle, Ridders and Eminik (successful producer, who has hits with Neyo and Usher). The record is going to be epic. Be on the lookout because it drops in 2015.

For more information on this exciting artist, please contact Andy Gesner and the HIP Video Promo staff at (732)-613-1779 or email us at info@HIPVideoPromo.com for more info on Damon Hess.