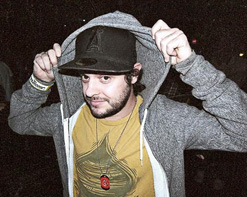 Hello programmers across the nation! It’s Andy Gesner and the rest of the HIP Video Promo staff serving up a high profile video from one of SoCal’s hottest names in the DJ circuit. Dan Sena has teamed up with hip hop legend Del the Funky Homosapien and singer Kylee Swenson to create “Song Of Siren,” a volatile single instantly worthy of your consumption upon arrival.

Dan Sena is the grandchild of famed poet Jorge de Sena and has played in countless bands and musical acts pushing the legacy of his family name. He is now closer than ever to achieving the recognition he so rightfully deserves for his talents by joining the digital frontier of the electronic dance market. Sena has been good friends with resident royalty Steve Aoki for over a decade, and under his guidance is starting to achieve his own meteoric presence. Dan Sena has already had the chance to team up with ex-From First To Last frontman and dubstep megastar Skrillex. Over the last few years Dan has been DJing nationally, producing remixes for the likes of Datarock, N.A.S.A, The Yeah Yeah Yeah’s, Sonny Moore (Skrillex), and Scanners. Sena now teamed up with seminal west coast rapper Del the Funky Homosapien, who has been a massive hip hop force since the 1990s and part of the Hieroglyphics crew. If you’re unfamiliar with Del’s work, he is also the instantly recognizable rapper in The Gorillaz’ biggest track to date, “Clint Eastwood.”

“Song Of Siren,” the new single from the Candy Floss Art CapitalistEP, is part piano ballad and part dubstep, featuring the angelic vocals of singer Kylee Swenson in the choruses. Dan Sena has not only put together a dynamic team, but forged a masterful combination of hip hop, pop, dance, and dubstep into one track. While Del lays down his signature flow, Sena warps, twists, and manipulates the synthesizer layers underneath him in all directions, only to tie it together with a piano driven refrain. This combination is full of ear candy and has to be heard several times over for all the layers to be truly appreciated. The video for “Song Of Siren” doesn’t lag behind its audio acrobatics either. The clip is as haunting as it is graphically exciting. Sena sets the scene by playing a grand piano that is haunted by Kylee. The viewer then gets a closer look at the sound waves of the tune with a graphically intensive digital setting as Del takes the stage. The whole thing then comes to an explosive finish as Sena smashes his piano to smithereens! The electronic scene has always prided itself with having some of the most standout videos in the industry, and this entry is no different from that high standard.

We are thrilled to be teaming up with the folks at Dim Mak Records to bring you this rising name in the scene. We’ve got lots of Dan Sena goodies here at the office, so if you’d like to team up and run a contest or giveaway, don’t be shy about getting in touch. If you need more info, call Andy Gesner at 732-613-1779 or email us at info@HIPVideoPromo.com.