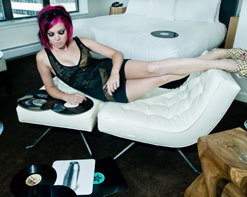 HIP Video Promo hates you. OK, not really, but now that we have your attention we want to bring to your attention a DJ straight from the heart of Chicago, the birthplace of house music. Her name is Dani Deahl and she is known throughout the music industry as a DJ, producer, journalist and blogger. She’s reached the Billboard charts as a producer, interviewed artists like David Guetta and Tiga as a journalist, and receives between 60,000 – 80,000 views a month as a blogger. But we can confidently say that it is a DJ that she really stands out.

Her love for house music began at an early age and she has been performing residencies since she was in high school. Along the way she has worked with artists such as Oh Snap!, Sue Cho, and Whiskey Pete, who lent vocals the Billboard featured “Poppin Bottles”. It was at a gig in Las Vegas that she had one of her most impressive collaborations, and this one was by complete chance. During one of her sets, unbeknownst to her, the booth had been hijacked by one of the greats in contemporary dance music, none other than Diplo! The two immediately hit it off that night and they took a picture to commemorate the night. The picture arrived in Dani’s inbox with the subject Diplo Hates You, and her next single was born. After recruiting her good buddy Oh Snap! to collaborate on the single for “Diplo Hates You” it was time to make the video.

The video begins with a rather corporate looking Dani and Oh Snap! entering an intimidating conference where Diplo himself is at the head of the table. Oh Snap! does his best to reassure Dani that she can handle the pressure, handing her a whistle on a gold chain (perhaps a good luck charm?) and giving a comforting reassurance. The sinister Diplo does his best to make sure that her presentation is a major league flop, including snapping her visuals in half right in front of poor Dani. This is more than she can take, and channeling her inner Happy Gilmore to find her own happy place, she blows on the whistle as hard as she can and in the blink of an eye their attire shifts into full party mode. One more whistle blow and we’re now in full party mode, complete with Diplo in a gorilla suit, Pete Wentz in a space helmet, confetti, lights and one of the meanest house tracks you’ll ever hear! If you think this sounds like a wild time, just wait until you see for yourself! Stuffy 9-5 desk jobs are for the birds, and we’re excited to have Dani Deahl providing all of us with the soundtrack to our days!

It’s our sincere pleasure to be working with Dani Deahl to help spread the word about her music and to do our part to get the “Diplo Hates You” video in front of a national audience. We’ve got the “Diplo Hates You” single available for you to check out, and would love to get you out to meet Dani in person at any of her upcoming appearances, so please be in touch! If you need more info you can contact the HIP Video Promo crew at (732)-613-1779 or email us at info@HIPVideoPromo.com. You can also visit www.DaniDeahl.com or www.Facebook.com/DJDaniDeahl to find out more about Dani Deahl.