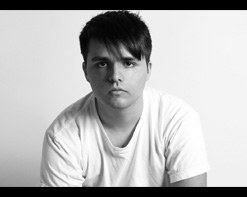 It’s impressive to note that Daniel Correa managed to release three albums – Progressions, Polluted, and Melodramatic – while still in school at the University of Miami’s Frost School of Music. He’s never shied from the spotlight, and whether it’s live or on his albums, Correa delivers songs that are a high-octane testimonial to the exhilaration and angst that define the process of coming of age.

This isn’t the first time we’ve partnered with the South Florida native: in the summer of 2016, we brought you his video for the pop/reggae smash “Don’t Stop”, an animated clip that showed him hitting the streets of South Beach and showing viewers a good time in the club. We then kicked off 2017 by sharing “Fold It Back”, which added a wall of horns and synths along with a hard-hitting backbeat; the video is a blistering performance as an underdog boxer steps into the ring to face off against a champion. Both singles saw action on various Billboard charts as well, no small feat for an independent artist!

Now, Daniel Correa is here to start off 2018 with the video for his latest single, “The Wraith.” The clip begins simple enough, as he and his producer/live performance partner Ahmed “King” Barroso, a four-time Grammy nominated music producer, are setting up in front of a plain white background for an on-camera performance. But soon we discover that these aren’t typical instruments… they’re all made of cardboard! Daniel and Co. then rock out before the camera as he spills his heart about “fizzling like nuclear fission” when a former lover tries to come back in to his life.

Daniel Correa has an innate ability to electrify audiences with his music, and we can’t wait for the world to see his stunning video for “The Wraith.” We’d love to see it included in your beloved programming, so please let us know what we can do to make that happen! Please don’t hesitate to contact Andy Gesner and the HIP Video Promo team at (732)-613-1779, email us at info@HIPVideoPromo.com. You can also visit www.DanielCorrea.com for more info on Daniel Correa.

For info about other Daniel Correa music videos, click HERE