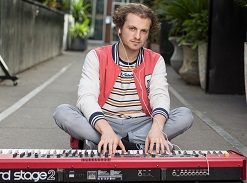 Daniel Shaw is the author of his own life with a heart that pulses through Australia’s streets. Since the age of 8, he has travelled in the lane no one else dares to journey down. He waves the flag of self-expression with his red keyboard, bleeding out his soul for all to see. His songs touch people intimately as he has seen his self-fulfilled prophecy come into fruition as an award-winning international singer, songwriter, and musician.

Daniel Shaw has lived a full lifetime in only 20 years. With his roots grounded in Melbourne Australia, he has made a name for himself street performing for 12 years. Cultivating a rightfully deserved loyal fanbase, he was able to release his first album LOVE in 2011. In America, he was able to compete in the World Championships of Performing Arts where he won silver in five categories for his original song “Hey Little Brother.” In 2017 he released his second album IT’S YOU, which added to his melodic and soft pop discography, mirroring musical influences Ed Sheeran, Bruno Mars and Billy Joel. He was also awarded runner-up at the Melbourne Music Festival competition and has been involved in spontaneous surprise performances for reality television shows. Currently, you can find Daniel Shaw making a name for himself through open-air concerts, radio shows, and various other events. Ready to break out of his label as the king of covers, he has been promoting his debut EP CROSS THE LINE, and his new single “Don’t Leave Me” has us all stuck to our seats.

The music video for “Don’t Leave Me Now” opens with Shaw’s image reflected on an open body of water, setting the scene with a deep sense of loneliness. As his solitude encapsulates him, he reflects back on his lost love, pleading in a desperate attempt to save himself from his own self-isolating thoughts. Accompanied by his keyboard, he works through his complicated emotions with a powerful ballad. At the bottom of everything, there are no more tears left to cry as he performs at the deep end of an empty pool. With electronic elements chiming in at the chorus, the video closes as he accepts his loss but knows that music will lead the way through this shallow time.

We’re honored to be working with Daniel Shaw, and we hope you embrace the new clip for “Don’t Leave Me.” We’d love to see this video added to your cherished programming and online presentations in a timely fashion! Rest assured we’ll have plenty of Daniel Shaw merch available for on-air contests and giveaways so don’t hesitate to get in touch. For more information on Daniel Shaw please contact Andy Gesner and the HIP Video Promo team at (732)-613-1779 or email us at info@HIPVideoPromo.com. You can also check out instagram.com/danielshawmusic/ and facebook.com/danielshawmusicman/ for recent updates on the burning heart of Melbourne.