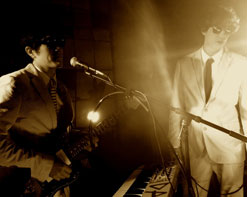 Das Tapes’ new single for “This Party” tells us repeatedly that “This party’s getting out of control.” We couldn’t agree more, and we wouldn’t expect anything less from a group that cites Dr. Teeth and the Electric Mayhem from The Muppets Band as their influences. Although not entirely sure if they’re serious or just having a laugh, one thing is clear; this group can turn any gathering into an all-out party. Kevin & Mark Ignatius are the members of Das Tapes, originally raised on the east coast but transplanted to the sunny allure of Los Angeles where they have really begun to flourish. They’ve quickly made a name for themselves via a combination of energetic live sets at venues such as The Viper Room, Dim Mak Studios & The Hotel Cafe, as well as coveted remixes of artists ranging from Mates Of State to Okkervil River. On top of that, they’ve even found the time to release multiple singles and mixtures.

Now they’ve fashioned together a proper, self titled EP which is currently available on their Bandcamp page and iTunes. Self produced and entirely performed by the Ignatius brothers, the Das Tapes EP is a solid collection of down and dirty electro-pop that incorporates sounds from all over the sonic spectrum. Leadoff track “Black Ferrari” says “she’s got looks”. We’d like to amend that slightly and say that this EP has got hooks aplenty! We promise that you’ll be umping the songs back to yourself before you even reach the mid-point, they are that good. But that’s not to say these songs are simple. Listen closely and you’ll hear layer upon layer of tracks all constructed into one delicious treat for our ears.

In the video for “This Party”, it’s a pretty literal interpretation of the song. The party is getting out of control! Bright lights, dark rooms and an eclectic cast of characters really bring this video to life. It starts with Das Tapes entering a rather depressed looking hospital/nursing home bingo game, where you’d be lucky to find a steady pulse. But within no time the whole place is an out of control party, where the old folks get into all kinds of trouble. And if you think the seniors are bad, just wait until you see what the kids are up to! When our parents and grandparents shake their head and talk about “kids today” we suspect this might be what they’re talking about….. And for those of you who may be faint of heart, don’t worry, we’ve included a slightly toned down version of the video as well!

We’re really excited to be working closely with the Das Tapes crew to get you this epic clip. We’ve got digital copies of theDas Tapes EP available for you and your viewers, so please don’t hesitate to be in touch! If you need more info please call Andy Gesner at (732)-613-1779 or email at info@HIPVideoPromo.com .