Dave Patten “So Much” 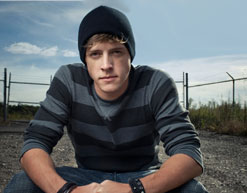 The singer – songwriter spends his days in a non-stop blur of musical action: writing, recording and producing exciting material, directing and producing his own music videos and posting them to video-sharing services like YouTube. In recent months, his channel films have received over 1.3 million views, turning Patten into a genuine Internet sensation.

Consider “So Much”, his newest single from his latest album (the protean Patten has already recorded four full albums of top-drawer pop!) It’s an effortless integration of hip-hop beats, soulful melody, and contemporary rock energy, and Patten performs it with consummate verve and poise. As always, he’s played all the instruments himself: he laid down the explosive backbeat and the percussive piano hook, and colored the track with six-string, synthesizer, and propulsive bass. The result?, a song that would fit in equally well on an urban or modern rock playlist, and an almost-certain smash on the Internet outlets where Patten is already well-loved.

For the first time, he’s taken the action to the streets outside — he stalks the sidewalks of the city at night, lit only by streetlights. Patten walks fast, and the camera retreats in front of him; the effect is kinetic, urgent, genuine, and animated by the singer’s own infectious enthusiasm. From time to time, he gestures at the camera — and it feels as though his hands are powerful enough to break straight through the frames and into your living room.

We are very pleased to be working with both Dave Patten himself and David Clark at Clark Records to bring you this engaging video and fast rising artist. If you need more info, call Andy Gesner at 732-613-1779 or email us at info@HIPVideoPromo.com.