David Moore “Breaking You Down” 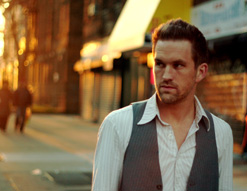 What’s up programmer friends! It’s Andy Gesner and the staff from HIP Video Promo, here with a brand new clip from a gifted singer and songwriter with deep roots in the indie music scene. Not much mainstream fuss was made about Chamberlain’s The Moon My Saddlewhen it was released back in 1998. But since then, the album has slowly acquired the status of an underground classic: a must-listen for anybody interested in heartland punk, Midwestern emotional hardcore, and end-of-the-millennium alt-rock. Alternative Press recently namedThe Moon My Saddle one of the “10 Albums That Shaped The Punk of Today”; the magazine also sang the praises of Fate’s Got A Driver, Chamberlain’s bracing debut for Doghouse Records. David Moore, Chamberlain’s principal songwriter, won plaudits for his poetic lyrics, his honesty and directness, and his sure hand with a metaphor. And listeners loved Moore’s voice – wise and whisky-soaked, full of passion, regret, and middle-American gravel.

After the regrettable breakup of Chamberlain, Moore sat on the sidelines for a few years, recharging his batteries and reacquainting himself with the quotidian. He never stopped writing songs, though – and as his perspective has matured, his empathy has deepened. My Lover, My Stranger is Moore’s first collection of new material in nearly a decade, and it delivers on the promise of his groundbreaking work with Chamberlain. The characters are well-drawn, the writing is eloquent and moving, and the performances are heartfelt, committed, galvanizing. With My Lover, My Stranger, the Indianapolis-based rocker has recorded one of the most insightful and inspiring albums we’ve heard all year – and one that’s destined to cast a shadow as long as The Moon My Saddle did.

The songwriter is careful to work subtle compositional wrinkles into his tracks, and the more you listen to My Lover, My Stranger, the more delicious idiosyncrasies reveal themselves. “Breaking You Down”, the lead single, is quintessential Moore: the track builds slowly, gathering momentum, and then explodes into a magnificent singalong chorus. It’s familiar, but hardly typical; the recording ebbs and flows, breathing easily, and opening wide enough for listeners of all backgrounds to inhabit. Like many of Moore’s best songs, “Breaking You Down” acknowledges the difficulties of modern living – and remains cautiously optimistic in the face of challenges. David Moore gives the listener a shoulder for to lean on, an ear for his troubles, and a voice that sounds not unlike his own.

Moore has also established himself as a formidable concert performer. During his days with Chamberlain, he could rock a club as fiercely as anybody in the Midwest; on his own, his shows may have gotten a bit quieter, but they’re no less intense. This autumn, he’ll be playing live on PBS’s Sounds Of The Heartland; in a month from now, he’ll do a set at the massive Monolith festival at Red Rocks. The famous natural amphitheatre seems the perfect setting to encounter David Moore’s rough and majestic songs – “Breaking You Down”, in particular, feels made for mountain grandeur. In the “Breaking You Down” clip, however, the singer-songwriter stalks more familiar territory – the slightly downcast streets of a post-industrial city. It’s the present time, but much about the video is classic: Moore’s turquoise roadster, the Rust Belt warehouse in which the band plays, even the Fifties-style microphone into which the singer shouts. He looks introspective as he does, weighing every word, conscious of the heft of each syllable

It is a tremendous pleasure to be working with the folks at The Working Group Management in order to champion David Moore and his “Breaking You Down” video. If you need more info, call Andy Gesner at 732-613-1779 or e-mail us at info@HIPVideoPromo.com. You can also visit www.WorkingGroupMgmt.com to find out more about David Moore.