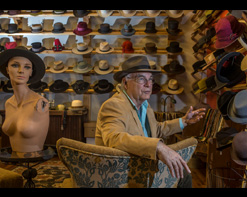 There’s no place in the world like Nashville.  It’s possible that no city anywhere has a greater concentration of talented musicians – people who write, and play, and dream songs that connect with millions around the world. David Olney is one of those musicians: his compositions have been recorded by legendary artists like Emmylou Harris, Linda Ronstadt, Del McCoury, and many others. Olney’s songs have been featured on ABC’s Nashville, and he was called one of the best writers in America by the incomparable Townes Van Zandt. His compositions are noted for their lyrical elegance, their wry observations, their consistent intelligence, and their universal appeal. No Depression credited him with “stretching the edges of Americana with an assortment of styles, characterized by finely crafted storytelling”. Nashville Scene simply said “he’s still a contender”. For fans in Music City and elsewhere, there was never any doubt.

Yet as successful as he’s been, David Olney has never compromised his vision for the sake of sales. Instead, Olney writes personal songs – strange, idiosyncratic, mysterious ones that aren’t always made to scale the charts, but which are designed to delight and intrigue the hardcore fanbase of listeners who’ve stuck with him for twenty studio albums and six live sets. “Situation”, his latest single, is a song like that. It’s a riddle, an alarm, a gentle but firm message to his countrymen that something has gone awry. Like many of the songs on Don’t Try To Fight It, his 2017 set, it feels like a poetic parable: words of wisdom from a man who has seen plenty, and who has much to share if we’re only willing to listen.

Olney is the star of the “Situation” video: that’s the singer-songwriter in the basement of a haunted power plant, calibrating the machines as diabolical agents in masks lurk behind him. Directors Anana Kaye and Irakli Gabriel present the clip as if it was an old movie, but the concerns are absolutely contemporary. Everything about the video – from the low ceilings to the exposed ducts and the creeping sense of cold and isolation – underscores the destabilization and uncertainty that Olney sings so eloquently about. His link to the outside world is a single telephone. He’s making an important call, and reporting as honestly and earnestly as he can. Are you going to pick up?

Here at HIP, it’s a true honor and profound privilege to champion the legendary David Olney, and we’re stoked to share the “Situation” clip with you and your viewers. He is an artist that is impossible not to root for and we’re quite confident you’ll agree. Please don’t be shy about getting in touch to let us know what we can do on our end to get this video into your programming and rest assured we’ll have plenty of outstanding David Olney merch to set up online/on-air contests and giveaways throughout the campaign. Please contact Andy Gesner and the HIP Video Promo team at (732)-613-1779, email us at info@HIPVideoPromo.com. You can also visit www.DavidOlney.com for more info on David Olney.