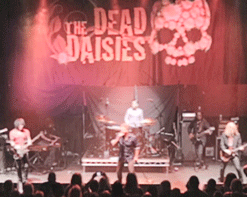 The Dead Daisies are at it again, this time with a live performance that will literally rock your socks off. HIP Video Promo is pleased to once again work with this super group of rock and roll personalities on their no frills new video for the standout track “Washington.”

In case you don’t know the story by now, The Dead Daisies is the brainchild of Jon Stevens (Noiseworks, INXS) and David Lowy, who first came onto our radar with his stellar band Mink. The band currently features an impressive roster including Dizzy Reed and Richard Fortus of Guns ‘n Roses, one of the most accomplished drummers on earth, Charley Drayton, behind the kit, and the newest addition to family, Darryl Jones of Rolling Stones fame, holding down the bass guitar!

The first single, “Lock ‘N’ Load” featured the guitar wizardry of Slash, and was accompanied by two versions of their video, which allowed viewers to choose their own ending. The song was a Rolling Stone magazine Daily Download and was also added to BBC Radio 2. The self-titled debut CD has been given glowing reviews in countless online and print publications. Through it all they’ve embraced the belief that when it’s all said and done that rock and roll lives and dies by the live experience. And what an experience it is to see the Daisies live! Fans in Australia, America, Canada and the UK were all covered in their whirlwind 2013 touring schedule, which included headlining shows and supporting artists such as Aerosmith, Alice In Chains, Jane’s Addiction, and more. They wrapped up the year with an epic show in Tel Aviv, Israel, leaving fans everywhere with an appetite for more.

It was at the sold out show at the o2 Shepherd’s Bush Empire in London that director Phil Poole shows us just how rock and roll The Dead Daisies music really is in this captivating video “Washington.” Every element of the live show is captured, from the backstage camaraderie, the soundcheck, and most importantly the killer live show. Images of the crowd bring to this live performance to life, and The Dead Daisies have an undeniably high energy throughout the entirety of the clip, showing us once again that there are few others that can match this level of showmanship. “Washington” is a song that excites rockers from every walk of life and this video is the perfect visual encapsulation of that feeling!

It’s our pleasure to lead off 2014 with such a badass video for you programming! We’re here to help you with anything we can do to get this video into your programming, so please get in touch and let us know! For more information on The Dead Daisies, please contact Andy Gesner and the HIP Video Promo staff at (732)-613-1779 or email us at info@HIPVideoPromo.com . You can also visit www.TheDeadDaisies.com/ for more info.