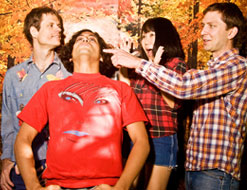 Greetings programmers, it’s Andy Gesner and the HIP Video promo staff with an extravagant clip from an extraordinary artist – Deerhoof. Some of you may be familiar with the band from their video for “Wrong Time Capsule,” a clip we have promoted several years ago. These innovative rockers have been shaking the globe for well over a decade, and have reinvented themselves once again with the brand new video for “Super Duper Rescue Heads !”

If there’s one thing Deerhoof isn’t afraid to do – it is bold experimentation. On one of their records, the band recorded separate songs in the left and right channels, so that the listener will hear a different song simultaneously in each ear! While this sort of wild and witchy dabbling can often result in a gray mess, the band has always managed to pull off their craft successfully. Pitchfork went so far as to label Deerhoof as ““the best band in the world.” This is also a band that David Bowie personally invited to play the Highline Festival in New York City. The group has done many national and international tours, including opening slots for Wilco, Radiohead, The Roots, The Flaming Lips, and Bloc Party to name a few. Deerhoof have been a press favorite for the past several years, with each release being highly critically acclaimed by the likes of The New York Times,Pitchfork, Alternative Press, SPIN, and NME.

The latest from Deerhoof lives up to the hype and honors the group has earned over the years. Coming from their brand new Polyvinyl Record Co. release titled Deerhoof vs. Evil, “Super Duper Rescue Heads !” is a mixture of styles and sounds that come together in one glorious harmony of sound. The song is based around a hard hitting drumbeat with sounds that seem to be fitting of a dubstep song, however the synth and guitars steal it away to the indie rock world. What really makes this number so exciting is how the song has the tendency to shift from almost complete disarray and cacophony into a gorgeous explosion of pop-friendly melodies and then back again. This effect allows the listener to find something new with every single listen. New instruments and layers are also intelligently and strategically introduced throughout the duration of the track. “Super Duper Rescue Heads !” is brilliantly strung together by the unique and welcoming voice of singer Satomi Matsuzaki.

The video is just as stimulating to the senses. “Super Duper Rescue Heads !” features the heroine and singer Satomi in a series of visual adventures that resemble the energetic action sequences of legendary cult favorite anime cartoons. Just as the song sporadically unties itself from its many layers, the video sheds its lasers for a more serene setting of television hypnosis. This sort of balance allows the video to be thrilling without sending the precious viewer into a panic. We are certain anyone who watches this clip will be just as glued to their hypnotic television sets as the characters in the video.

We are beyond honored and ecstatic to be able to serve up such an exciting bit of music video footage for your viewers’ consumption. Deerhoof will be busy headlining a massive United States tour this winter, which then evolves into international dates, so be sure to reach out to us for any interview opportunities. The good folks at Polyvinyl have provided us with copies of Deerhoof vs. Evil for all your contest and giveaway needs. If you need more info, call Andy Gesner at 732-613-1779 or e-mail us at info@HIPVideoPromo.com.