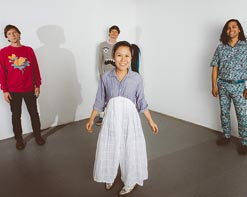 From their humble beginnings as an obscure San Francisco noise act, Deerhoof have become one of indie music’s most influential bands with their ecstatic and unruly take on pop. With their consistently innovative and acclaimed releases such as Deerhoof vs. Evil and Breakup Song, they’ve managed to take what was once a fringe sound and turn it into a carefully crafted style that is instantly recognizable as Deerhoof.

On their newest release, La Isla Bonita, they are still in a constant state of reinvention, regularly raising the bar for noise pop perfection. Pitchfork gushed over the album, saying Deerhoof “churn out album after distinct album without ever breaching self-parody” and that La Isla Bonita “thrives in the space between the sugar you want and the acid you get.” A very apt description! Today we are bringing you the maniacal new video for the stand out track “Exit Only,” which NPR proclaims is “a monolithic monster that comes ripping through headphones.”

Much of Deerhoof’s strength is built on the dichotomy of two opposing forces colliding head-on. Pop vs. noise. The push and pull of the musical stylings of Satomi Matsuzaki on bass and vocals, Greg Saunier on drums, and John Dieterich and Ed Rodriguez on guitars. All of this is a part of Deerhoof’s success, so it’s fitting that the new video for “Exit Only” would be focused around one of the most intense and vitriolic staring contests imaginable.

To the delight of viewers all over, Deerhoof has enlisted Michael Shannon (Boardwalk Empire, Revolutionary Road) to star as the principal actor for “Exit Only.” The trick is that he’s engaged in a staring contest with himself, playing BOTH sides of the competition, and he does both with a devilish conviction. The first Michael immediately goes on the attack, cueing up “Exit Only” on his headphones and proceeds to use a sort of cosmic power to absolutely destroy the vulnerable version of himself seated across the table. A frostbitten hand and busted teeth are a few of the punishments he dishes out, but it still can’t elicit a blink from either side. And right when it seems as though they are on the verge of tearing out their retinas (or worse), guitarist Ed Rodriguez blasts through the wall to vanquish the evil Michael to his proper place six feet under. This may all seem a bit bizarre, but with the acting talents of Shannon shining through this video is a crazy trip packed in under three minutes. A worthy viewing if there ever was one!

We’re psyched to once again be working closely with Polyvinyl Records to bring you this insanely satisfying clip and are here to hook you up with anything you may need to get it into your programming. Please hit us up for copies of La Isla Bonita or if you’d like to catch the band on the road this spring in an area near you! Please contact Andy Gesner and the HIP Video Promo crew at (732)-613-1779 or email us at info@HIPVideoPromo.com . You can also visit www.PolyvinylRecords.com or www.Deerhoof.net for more info on Deerhoof.