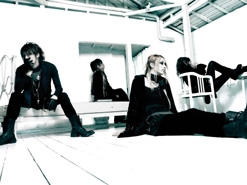 Greetings rock and roll lovers! It’s Andy Gesner and the staff from HIP Video Promo, back with another fascinating video from a band with an international audience. Who says that music needs to be sung in English to be successful in America? During the past few years, the J-Rock movement has proven otherwise. J-Rock – performed entirely in Japanese – has claimed a place in the crowded stateside market. And J-Rock artists haven’t merely played at their own well-attended shows and festivals; increasingly, heavy bands from Japan have shared bills with the some of the biggest names in American metal. Alongside Atreyu and Avenged Sevenfold, this year’s RockStar Taste Of Chaos tour will feature several thunderous Japanese rock bands. And whenever a major J-Rock bill is assembled in the United States, you can count on one thing: D’espairsRay will be part of the show.

The Japanese four-piece is no stranger to these shores. They’ve already familiarized rock audiences with their music on their recent American tour with Florida’s Genitorturers (they were one of the last bands ever to play at CBGB), and they rocked the massive JRock Revolution show held in Los Angeles last year. Away from America, they’re already stars: in Asia, their records are beststellers, and they followed up their turn at the ‘06 Wacken Open Air metal festival in Germany with a swing through Scandinavia. Their international profile – and their compelling sound – has placed D’espairsRay at the very forefront of the J-Rock movement.

Upon hearing the band, it’s immediately apparent why they’ve connected with stateside audiences. On their most recent full length offering, Mirror, there’s nothing exotic, difficult, or off-putting about the music they make; if anything, D’espairsRay sounds and feels more like a classic U.S. hard rock band than most American groups working this territory. Beyond the foreign-language lyric, “Squall”, their current single, is simply a dramatic, ambitious, heartfelt, and sharply-performed piece of radio rock. You might not be able to understand exactly what D’espairsRay is singing about, but frontman Hizumi is such a talented communicator – and so emotionally forthright – that you’re certain to connect with the song. In fact, if you aren’t paying close attention, you might not even realize that Hizumi is telling his story in another language. You don’t need to know any Japanese to feel the force of this “Squall”

D’espairsRay first made their name in their homeland as part of the “visual kei” insurgency – an underground music uprising that emphasized theatrics, costuming, make-up, and spectacular stage sets. Thus, it’s not surprising that the group is terrific to look at. The four members of D’espairsRay are tall, slim, cool, and stylish, and they are – rightfully – the focus of the “Squall” clip. The stark and chilling video, is, again, not so different from what you’d expect to see from a first-rate modern rock band: it’s just been better executed. A beautiful young woman wanders through the rubble surrounding an abandoned and crumbling factory; the expression on her face is serene, knowing, mysterious. Inside the distressed structure, D’espairsRay roars out their song. Hizumi sits in a leather chair and stares out the fractured, cloudy industrial windows. Shot in cold greens and muted greys, the “Squall” clip matches the desperate, epic, slightly futuristic tone of the song. This decaying world is strange, yes – but it’s oddly familiar, too.

It is our great pleasure to be working with Jonathan Platt, Yvonne McDonald and the rest of the crew at J Shock to bring you this captivating new clip. They’ve been kind enough to hook us up with plenty of copies of Mirror for your on-air giveaway needs, so please don’t hesitate to be in touch if you’d like to get your hands on some! You can also catch the band on this year’s Taste Of Chaos tour when it comes to your market! If you need more info, call us here at 732-613-1779 or email us at info@HIPVideoPromo.com.