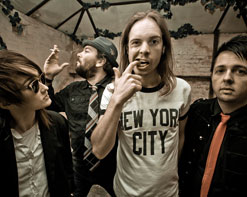 HIP Video Promo is excited to introduce this intriguing band straight from Adelaide, Australia—Dexter Jones. This four-piece indie-rock band has combined the guitars of Modest Mouse and the quirky sounds of Interpol to create a masterpiece of complete rock elements. Derived from a series of musical styles, Dexter Jones has put together a unique blend of rock and pop genres to bring you a sound based on straight rocking.

Although their music contains catchy riffs and sing-a-long choruses, Dexter Jones has decided not to stick to any certain type of formula or rhetoric. The band formed in 2010 when ex Blow Up Betty drummer, Kristy Mitchell, joined lead guitarist Ben Flett, vocalist Matt Soang, and bassist, Ben Nash. They teamed up with Tim Pine from Rocking Chair Films and created their video for the single, “DCF.” In 2011, Dexter Jones released The New York EP and signed to JL Music Publishing Australia in July. Regional tours of South Australia occurred during the end of the year, an opening tour slot for legendary Australian rockers INXS is happening at home in March and by the summer of 2012, they will be doing their first summer tour of the United States.

In their latest video for the song “Unique New York,” silhouettes of each band member perform their instruments as the Big Apple flashes behind them. The song is upbeat and is a perfect definition of what New York City is—it’s loud, it screams at you, and it’s full of bright lights. The lyrics contain descriptions of what the city seems like to someone who has never been there before. The look of the video is interesting, being that a combination of both black and white colors are paired up with pale, sky blues. Throughout the video, you get a quick glimpse of New York, and it explains the intensity that lies within it.

Dexter Jones is a band that you won’t want to miss, and you certainly will not with their video for “Unique New York.” Their eclectic style and insightful harmonies will get you ready for the fast-paced environment of every day life. From Australia to the United States, the energetic charisma and grace of Dexter Jones will enlighten ad pull you closer. For more information, please contact Andy Gesner at HIP Video Promo at (732)-613-1779 or email at info@HIPVideoPromo.com .