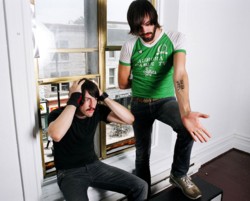 Greetings and kindest regards to everyone in the music video community! Its Andy and the staff from HIP Video Promo with more incredible music video love from our pals at VICE. Spring is finally here, the birds are singing in the trees, and the HIP staff and I are falling in love with every single one of the new VICE artists that come down the indie rock pike. Lucky for us, we’ve just gotten the new Death From Above 1979 video – and we’re thrilled to be able to share it with you. We’re still recovering from “Romantic Rights”, the first single and clip from the tellingly titled You’re A Woman, I’m A Machine. On its heels comes “Blood On Our Hands” – a song simultaneously more ferocious and more tuneful than its predecessor.

Since the release of You’re A Woman, I’m A Machine, the hard-rock duo has garnered little but accolades. Raves in publications as disparate as Spin, Pitchfork, England’s venerable Kerrang!, and theToronto Star (DFA 1979s hometown paper) testify to the group’s international and cross-genre appeal. They’ve toured ceaselessly, bringing their fuzzed-out, frenetic rock songs to concert halls across North America. DFA 1979 is poised to flatten the U. K. on their return visit to England this May. Here’s a heavy band cutting a deep and jagged slash across the indie terrain.

“Blood On Our Hands” calls attention to the group’s signature arrangement aesthetic – Death From Above is a hard-rock act without an electric guitar player. Sebastian Grainger hammers like a berserk jackhammer on the drum kit while Jesse Keeler puts his distorted bass through the paces. On “Blood”, Keeler plays so far up on the neck of his instrument that it sounds like he’s taking an overdriven six-string lead. As Grainger hollers out his story of a broken relationship (“there is blood on all the shoes you’ve worn from the people you’ve been stepping on”, he deadpans, and he doesn’t seem at all alarmed by it), Keeler laces squiggly analog synth lines over the top of the mix. When the bassist drops down to the bottom strings for the song’s brutal bridge, you’ll wonder why heavy bands bother with electric rhythm guitar at all.

Originally released in England as part of a limited-edition picture disc last summer, the initial pressing of “Blood On Our Hands” sold out immediately and turned heads at Time Out London. The natural affinity between DFA 1979s hard-rock and dance music was not lost on English listeners and deejays – a club reworking of “Romantic Rights” was named one of the best remixes of the year by the NME. The Brits understand instinctively what American audiences are just learning: Death From Above 1979 is a thunderous rock band that you can get down to.

The indie kids captured in the “Blood On Our Hands” video know this well. Fists raised, they jump up and down, egged on by the frenetic duo. Shot in grainy-but-vibrant tones, it’s hyperactive, energetic, stark. The handheld camera jumps around wildly, swinging from shots of the crowd to images of the band throwing down onstage. White lights flash and swell, shadows streak across the faces of Keeler and Grainger, and blood-red gels occasionally throw crimson flashes against the brick wall behind them. At the end of the clip, we watch the pair exit through the stage door, seat themselves roughly in the back of a limousine, and ride off into the night – but just as suddenly, we’re jerked back to the concert hall. Keeler and Grainger stand at the lip of the stage, palms open, blood on their hands.

One of the biggest HIP highlights of 2004 was establishing a friendship and working relationship with the savvy music lovers at VICE. We’re stoked to be working with them to bring you this compelling video and are fully prepared to meet all of your Death From Above 1979 needs in a timely fashion. If you need more info, call Andy Gesner at (732) 613-1779, or email info@HIPVideoPromo.com. You can also visit www.deathfromabove1979.com to find out what all the buzz is about.