The High Dials “Fields In Glass” 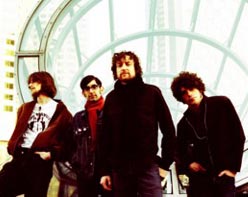 Howdy to all my programmer pals – it’s Andy Gesner and the staff from HIP Video Promo, here once again with another stunning, imaginative video from an up and coming band. Today’s clip comes from the High Dials, a Canadian quartet with a new spin on a venerable style. Psychedelic revivalists with a letter-perfect reconstruction of the sound of 1967, the Dials have delighted pop enthusiasts worldwide since the release of A New Devotion, their luminous debut

New single “Fields in Glass” finds the High Dials at their most resonant – it’s a neo-psychedelic jaw-dropper complete with Carnaby Street harmonies and ringing guitars. Here, as elsewhere on A New Devotion, Krisjan Leslie’s production brightens the instruments while preserving their transparency. The bass guitar staggers and lopes in a pattern that’s Beatlesque in its circularity, the six-strings carry the requisite trippiness, and the vocals are smooth, sweet, and otherworldly.

A New Devotion – written by the High Dials visionary singer Trevor Anderson – is an unapologetic concept record pitched toward the frustrated cubicle-dweller. Clocking in at a little over an hour, the group generously offers eighteen songs of loneliness, dislocation, and escapism set in a mechanized future that looks very much like our present. Opener “Diamonds In The Dark” sets a thematic tone that’s later revisited in “Fields in Glass”: Anderson, in the persona of Silas, his narrator, sings of the jeweled cave he’s found within his imagination. This inner respite from cold, workaday reality is the High Dials great theme, and the attempt to salvage humanity and sweetness within the cold walls of the machine is the group’s preoccupation. Silas is confronted by the cool surfaces of office towers in “Fields in Glass”, and believes he can see a verdant, welcoming alternative reflected in the silicone barriers. Like Sam Lowry in Brazil or Charlie in his Great Glass Elevator (both of whom are cleverly referenced in the “Fields in Glass” clip), he’s confined by plate glass walls and sharp corners, but conscious of the better world he can reach inside his own mind.

The gorgeous animated video for “Fields in Glass” makes the travails of Silas feel immediate to the viewer. He’s shown as a sad-looking, stoop-shouldered man; trapped in his workspace and dreaming. Our Silas is large-eyed and sad, but intrinsically sympathetic — we follow his excursions through the glass landscapes of his chilly city, and delve with him into sunlit and patterned visions of his own devising. A plate glass window becomes the gate to a magnificent garden, a puny office lamp becomes a sky streaked with orange sunshine. We take these trips with Silas, and cheer for him, even as we realize he’s bound to the firm terrestriality of his desk.

Throughout the clip, the animation is fascinating. The characters twist, blur and stagger along the cold streets and office parks, and the fantasy settings glow with a drugged radiance. Yet every trick of the camera has a referent within the scenario.The protagonist’s form warps and puckers before us, and we’re initially encouraged to see this as standard psychedelic horseplay. A moment later, we realize it isn’t – it’s Silas reflected in the rotating glass surfaces of a revolving door.

Here at HIP we had a great time working with The High Dials the last time around, so we’re psyched for more of the same. The band is currently touring(see the tour links for dates and locations), so if you’d like to see them or do an interview or video ID when they pass through your area, let us know. If you need more info, call Andy Gesner at (732) 613-1779, or email info@HIPVideoPromo.com.