Dimitri Vegas & Like Mike vs Ummet Ozcan "The Hum" 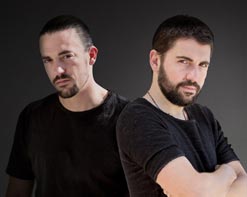 Thanks to it’s roaring presence and ability to unite fans in their packs, the Belgian brothers Dimitri Vegas and Like Mike have finally decided to release this clubland scaling hit “The Hum.” Following it’s explosive inclusion in their surprise 3 Are Legend appearance, alongside their musical brother Steve Aoki, at Ultra Music Festival in Miami this year, “The Hum” got it’s official worldwide release on Smash The House on April 20th. The track had the Miami crowds primed and ready setting the tone for one of the most exhilarating sets of the entire weekend.

Linking up with one of 2014’s biggest artists thanks to their mega-selling ‘Eat, Sleep, Rave, Repeat’ remix, the collective trio have concocted together crowd-captivating hum’s and an otherworldly build-up that simmers with melodic undertones, with fans itching to get their hands on a final, polished product ever since “The Hum” live premiered at Tomorrowland during the resident duo’s headline, record-breaking set of 2014 that has been viewed over 26 million times on YouTube – and counting… Adding to the imprint’s current joint-shaking, party-ready anthems, the current Top 100 #2 ranked DJs now join forces with Ummet Ozcan for the future-classic track “The Hum”. Those are some impressive numbers to try to top, but fear not, this collection of clever minds has delivered just the right thing to do so.

From strewn out babes left, right and centre, two Hollywood icons and a bewildering amount of party vibes, the sunshine-soaked, skin-filled video for Beatport #1 anthem “The Hum”, was always going to push the boundaries of smashing the house, to a whole new level. Let the chaos commence with this top-tier trifecta of talent, as the DJs are joined by Hollywod’s poster party boy Charlie Sheen and martial arts master Jean Claude Van Damme, to tear a mansion-sized hole through the city. Get a taste of the wild and certainly the unforgettable, for a memorable night to top all others with behavior that has law enforcement officers puckering up, monkeys setting alligators on the loose and sparring Hollywood hunks.

It’s always a pleasure and honor to work with the good folks at Smash The House and Armada Music to bring you the absolute best of the best in contemporary EDM music. Anything you need to get this video into your programming, we are here to make it happen. Please contact Andy Gesner and the HIP Video Promo crew at (732)-613-1779 or email us at  info@HIPVideoPromo.com . You can also visit www.DimitriVegasandLikeMike.com/ or www.Facebook.com/SmashTheHouse/ for more info on Dimitri Vegas & Like Mike.