Dinner And A Suit “Too Late” 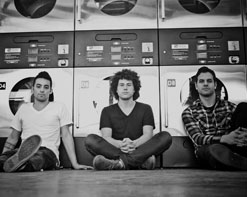 Hello programming friends, it’s Andy Gesner and the HIP Video Promo team here to bring you an exciting new video from a young bunch of pop/rock rocker kids who we are certain will leave quite the impression on you and your viewers. When you hear the name Dinner And A Suit, you probably think about a fine glass of wine, some low lighting, candles, maybe a nice cut of filet mignon, but do you think of rock music? You will now, because these guys are bringing a certain classy element to rock music. Out with the over the top antics and narcissistic behavior so commonly associated with the genre, and in with the intelligent approach to music with well crafted melodies and songs, insightful lyrics and a polished package with a fine group of young men.

Growing up in our home state of New Jersey, these fellow Garden Staters built up quite a name for themselves in the southern half of the state and surrounding areas before packing their bags and heading down to Nashville to pursue their dream. Maybe it’s because being from New Jersey they just see first hand how crowded it can be in the New York City area and they knew they would have a little more space to breathe and think, or maybe it’s because they’d been around the block enough in their short existence (they’ve toured the US, played MTV2’s Projekt Revolution, and the Vans Warped Tour) to take a great opportunity when it presents itself. Shortly after the move, the band began working on their new full length album, Since Our Departure, which continued to take them all over the country. To record the album, the band split their time between Glow in the Dark Studios in Atlanta with producer Matt Goldman (Anberlin, Underoath), then with Tyler Orr (As Cities Burn, Copeland) at First Street Studios in Cleveland TN. It takes a lot of belief and faith in yourself to leave home to pursue these dreams, and luckily this has both.

Woven through Dinner And A Suit’s big & bold pop/rock songs are universal themes of forgiveness and hope, love and loss, and discovering a place in the world. Anyone could relate to these lyrics and feel the true passion of what is pouring out of them over the course of Since Our Departure. The video for “Too Late” incorporates a little bit of everything, from some engaging performances, some finely crafted cinematic looks and a tasteful and compelling use of a little vintage green screen action. Frontman Jonathan Capeci, along with his cousin Joey Beretta and rounded out by Anthony Genca all hold the attention of the viewer and are naturals in front of the camera as they use the opportunity to state their case and display some of the live energy that has made them a crowd favorite since their inception in 2009. We see Capeci walking along the fake city streets with the lights zooming past (think “green screen” from the 1960’s) and within the darkness they shine like a giant rock and roll lighthouse. The resulting product is a bold anthem, layered with soaring melodies that are riveting with honesty.

We’re very excited to be working with the Dinner And A Suit, and are set up to get you anything and everything you may need to include this video in your programming. We’ve got plenty of copies of Since Our Departure for you and your viewers to enjoy so please don’t hesitate to be in touch. If you need more info, please contact Andy Gesner at (732)-613-1779 or email at info@HIPVideoPromo.com. You can also visit www.Facebook.com/DinnerAndASuit for more info on Dinner And A Suit.