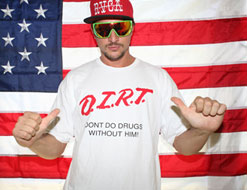 Hello programming friends, it’s Andy Gesner and the crew from HIP Video Promo, here with a hilarious new clip from a bunch of veteran pranksters on a spree. Is it possible to be too Jewish to dance? Dirt Nasty seems to think so — and his pals in LMFAO agree. It’s not that Mr. Nasty (or Dirt to his friends) doesn’t want to cut a rug. It’s that every time he tries, he falls on his face. In “I Can’t Dance,” Dirt Nasty gets down, or attempts to, to the funkiest version of “Hava Nagila” you’ve ever heard.

He’s kidding, of course. But kidding around is what he does. Dirt Nasty is the hip-hop alter ego of Simon Rex, a man with a giddy string of comedy credits to his name. He’s been in Scary Movie 3 and 4, Superhero Movie, and has also appeared on the small screen in What I Like About You. As a video jockey on MTV, he was one of the station’s most memorable personalities. His participation in music video isn’t limited to introducing them — he’s also shown his face in some of America’s favorite clips. That bad boyfriend clowning around in N*E*R*D’s classic video for “She Wants To Move”? That was Rex. The mustachioed love man who gives Ke$ha a convertible joyride in the “TiK ToK” clip? Rex again.

Dirt Nasty is, without a doubt, something of a parody. But it’s also an opportunity for Simon Rex to express his genuine love of hip-hop. And a funny thing has happened on the way to the punchline: many emcees and rap producers have loved him right back. His smooth singsong flow is ideal for telling jokes and cracking wise; it’s also surprisingly effective once he sinks his teeth into a verse. LMFAO put him in their video for “Yes”; on “I Can’t Dance,” the two provocateur-emcees rap right along with him. Some of the hottest names in hip-hop have lined up to work on Nasty As I Wanna Be, the second Dirt Nasty album, including Too Short, Alchemist, Kool Kojak, Cisco Adler and more. The irrepressible Ke$ha returns Dirt Nasty’s favor by lending her characteristic voice to a track.

Simon Rex is no stranger to Lil Jon, either. Dirt Nasty kicked a verse on Mickey Avalon’s “What Do You Say,” a Lil Jon production featured in “The Hangover.” “I Can’t Dance” suggests that Rex picked up a few tricks from the crunk hitmaker. The melody to “Hava Nagila” is played on a thick, abrasive synthesizer sound reminiscent of Lil Jon’s mid-’00 singles. To underscore the Semitic-punk theme, Dirt Nasty appears in the video with sidecurls, rapping next to a glowing Star of David. The two LMFAO emcees play along, too, acting like boisterous attendees at an out-of-control bar mitzvah. This is a hip-hop video, though, so there are plenty of scantily-clad girls on hand — both in the club where Dirt Nasty embarrasses himself, and in the tricked-out Jewish temple that houses the rapper’s reverie.

We’re excited to working with the Dirt Nasty crew to bring you this must-see video! If you need anything Dirt Nasty-related, don’t hesitate to be in touch, we are here to hook you up with whatever it takes to get this video into your programming! If you need more info, call Andy Gesner at 732-613-1779 or e-mail us at info@HIPVideoPromo.com. You can also visitwww.DirtNastyMusic.com or www.Twitter.com/Dirt_Nasty to find out more about Dirt Nasty.