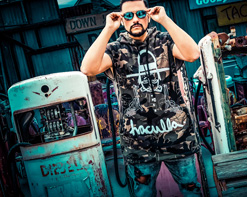 DJ Polique knows how to reach people with his music. Germany’s most successful urban DJ, this producer is renowned for his dance club mixes and fiery hooks. Topped with lyrical bars by a who’s who of collaborating artists like Follow Your Instinct, Snoop Dogg, Tyga, Mario Winans and Goldie, DJ Polique’s songs stand out on any set list, sure to be playing in every dance club in the world.

Kostas Triandafilidis created his name in the 1980’s from his Polish-Greek origins, so that in English “Polish” and “Greek” were mashed up to make a new word: Polique. With 12 years of experience on the turntables, over 150 club bookings per year, 10 million followers on YouTube, 50,000 mixtapes sold, and over 1, 200,000 clicks on SoundCloud, DJ Polique is the #1 institution of Urban Music out of the North Bavarian area of Germany. Polique has been hosting his own radio show “N1 Playaz Nite” on Hitradio N1 92.9 in Nuremburg for 13 years. After this DJ Polique went on to release chart-hitting singles like “Turn Me On,” “Fuego Gasolina,” “Don’t Wanna Go Home” (which reached #1 in Turkey, Greece, Romania, and Cyrpus) and his new hit single “Dimes Only.”

Featuring his own rap duo Follow Your Instinct, singer Jacob Luttrell, and the one and only Snoop Dogg, DJ Polique’s video for “Dimes Only” is a paradise trip that makes viewers feel like a VIP at an exclusive celebrity after party. Following two beautiful “dimes,” played by Columbian model Diana Duarte and Venezuelan model Endrina Chiquinquira, the video shows Polique and Jacob ushering the girls from the Miami beach to a hype beach party in their cool ocean blue cruiser. Meeting up with Raptile, Lionezz, and Snoop Dogg on the way, this video is all about the journey. Of course, that’s not to say the destination isn’t top notch, as well! Kick back, throw on some shades, and get ready to crank “Dimes Only” up to ten!

We here at HIP Video Promo are so excited to be working with such a talented and dedicated music producer. DJ Polique will be on tour this summer with appearances throughout Germany and Greece; all upcoming shows can be found on his website. For more information please contact Andy Gesner and the HIP Video Promo team at (732)-613-1779 or email us at info@HIPVideoPromo.com or visit www.DJPolique.com for more info on DJ Polique.