The Dollyrots “Because I’m Awesome” 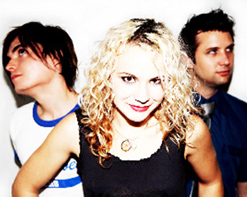 A big, warm hello to all of my awesome music video kindred spirits! It’s Andy Gesner and the staff from HIP Video Promo, back with another super-cool clip from an emerging band. Here on the East Coast, the leaves are back on the trees, the sun is shining, and it’s time once again to roll down the car windows and blast loud rock and roll. Lately, our album of choice has been Because I’m Awesome by The Dollyrots – a blast of infectious, optimistic punk, delivered by a trio of telegenic kids from Los Angeles with attitude to burn. We’re not big believers in pedigree, preferring to let records speak for themselves, but we’d be remiss if we didn’t tell you that Because I’m Awesome is the latest release from Joan Jett’s Blackheart Records Group. The Dollyrots (and especially star-in-the making Kelly Ogden, their brash frontwoman) embody all of the virtues we associate with Jett – from their succinct, undeniably hooky material to their confrontational punk-rock sense of glamour to their terrific self-deprecating sense of humor.

Of course, you may know all of this already. Lately, The Dollyrots and their music have been turning up everywhere. The band has shared stages with the like-minded Muffs and Soviettes, they’re currently touring the nation, and they’ll be hooking up with the Warped Tour in July. Dollyrots songs have been used on CSI:NY, and Kelly Ogden appeared in an episode of the program as the bassist of a fictitious rock group (and even got to be “murdered” on network TV by a bandmate! How punk is that?) The exuberant “Watch Me Go (Kissed Me, Killed Me)” is set to be featured on The Simple Life; “This Cruch” received airtime on The Style Network and lead single “Because I’m Awesome” on Ugly Betty. Sirius Radio deejay and rock ‘n’ roll hero Little Steven named “Because I’m Awesome” the “coolest song in the world”.

Because I’m Awesome is a collection of immediate, undeniable pop-punk shouters; a super-bounce ball caroming off of the walls of contemporary rock radio. The band inhabits the perspectives of spurned lovers and outraged kids, they romp through a delirious cover of Melanie’s infamous “Brand New Key”, get off a few shots at the political establishment, and generally have a fantastic time. Guitarist Luis Cabezas and drummer Chris Black know their Ramones and Pixies records cold, and they propel these songs forward with a manic urgency. But Kelly Ogden is the star of this show, and her half-snotty, half-sweet vocals serve as an irresistible come-on.

The title track offers some ironic self-affirmation, and catches Cabezas and Ogden in a tongue-in-cheek discussion of the frontwoman’s greatness. It’s all done with a wink and put-on pout, and it’s as much a critique of the pomp and hyperbole of the music industry as it is a commentary on culture of self-promotion in Los Angeles. For the video, they’ve also found the perfect metaphor: the tryouts of American Idol. The clip finds the band at the filming of a hypothetical reality show called Because I’m Awesome, and the camera scans the long lines of disaffected performers waiting to strut their stuff. The judges are here, too, leaning back in their padded chairs, pointing pens at the would-be rock stars, and critiquing the performances with a diagnostic eye and a sense of entitlement. The three Dollyrots stand before the logo in different guises: a California girl, a cowboy, a rapper in a hoodie, a glamour queen in a black dress, an anarchic cheerleader. Ogden even puts on a bunny suit with a gas mask and shoves the other contestants. The Dollyrots won’t play by the rules; they’re storming the gates of the fame industry on their own terms, and according to their own offbeat logic.

We are thrilled at our opportunity to work together with Julie Radaer and the entire team at the Blackheart Records to bring you such an awesome video! The Dollyrots will be on tour all summer long and available for video interviews when they come to your market, so keep an eye out. Also, we have enough copies of Because I’m Awesome to go around for all of your on-air giveaway needs, so drop us a line to get your hands on them! If you need more info, call Andy Gesner at 732-613-1779 or e-mail us at info@HIPVideoPromo.com. You can also visit www.Blackheart.com, or www.TheDollyrots.com to find out more about The Dollyrots.