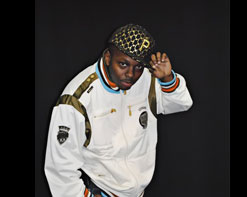 Howdy friends and music video lovers, it’s Andy Gesner and the HIP Video Promo crew once again bringing you a video with a message that we hope you will help us share from an artist who speaks from the heart and delivers like a pro. Merriam-Webster defines the word free as “not determined by anything beyond its own nature or being : choosing or capable of choosing for itself”. Unfortunately for way too many victims of domestic abuse and violence, that very choice is ripped away from them either by force or by fear. We salute Done Wright for making his new video for “Free” to be a statement against domestic violence and the all-too-often situation that affects one in four women in their lifetimes.

Listen to the lyrics of Done Wright and you can clearly tell that this is man who has walked some long miles in his shoes, growing up on the streets of Brooklyn, New York. But don’t let the story fool you into thinking that this is some run of the mill rapper who wants to tell you about how tough he is and how he’s the baddest dog on the block. Done Wright spits about how he is “Einstein with a different face” and how ever since he was in the 7th grade it was his goal to escape his environment, but he never loses his positive outlook on life that things are always getting better and that he turns a blind eye to the temptation around him and instead uses his music as his means and methods to get out and overcome any adversity life has thrown at him. Free at last, Done Wright has learned a lot in his time and he fits it all into two lightning quick verses that will leave your jaw down on the floor.

Within the lyrics for “Free”, Done Wright talks about a girl named Trina and the personal abuse she takes at the hands of an abusive partner. He is a deplorable character, who seems to do nothing better with his life than sit back on the couch while Trina does her best to provide for themselves and the children. But her honest day of work is met with physical violence, dinner plates being thrown on the floor and just an overall sense of being a prisoner in your own home. Done Wright serves as a sort of narrator for the clip, interspersing footage of himself dropping lines around town into the video, and keeping the story moving. The pressures of abuse turn out to be too much for Trina, who takes a drastic step to free herself from the abuse. Life is not free for the victims of domestic abuse and this video is a stark reminder of this ugly mark on society.

Done Wright earns his name in this one, because he is doing the right thing and helping to spread awareness! We’re honored to be working with Done Wright and the crew at HardWork Entertainment to bring you this clip. The “Free” single is now available for download on iTunes, so go pick it up! If you need more info you can contact Andy Gesner at (732)-613-1779 or email at info@HIPVideoPromo.com .