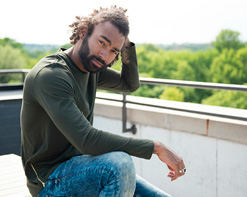 Drew Vision is an R&B star rapidly ascending the ladder to success. Trained professionally with a dual lyrical and vocal talent, he is the total package. Drew Vision has given more than a decade to live performances, making his stage presence captivating to every listener and fan that comes his way. Crediting a matchless, soulful sound that can keep up with modern times as well as pay tribute to the past, Drew forms a connection with almost every listener out there. “Without You” is an upbeat and infectious tune that embodies Drew’s deliberate mixture of Pop and R&B with international and island sounds. It is not recommended to turn a blind eye to this refreshingly new kingpin.

Releasing his third album, The Balance, as a completely independent and self-funded singer and songwriter, 2016 was a big year for Drew . The positive reception of the album led to a performance on Center Stage at the Essence Music Festival. Drew Vision has also performed with Justin Timberlake and Kanye West as well as has been in Beyoncé’s music video for “Best I Never Had.” Discovered by People Magazine, he has been highlighted in three interviews and performances by this well established tastemaker. Drew has also partnered with Coca-Cola and hosted two live specials on Coke TV. Not just a one-trick pony, he has been successful in modeling and ambassador work for popular brands like Coach, Pepsi, Lays, Bacardi and Samsung. His team is currently in talks with film and television studios as well as music licensing ventures. He is back in the United States currently for a college tour.

As a follow up to “The Balance” Drew toured Europe in the Fall of 2016. There he worked with Grammy Award-winning and platinum-selling producers on five new singles. “Without You” was written and produced in Sweden with Chris Wahle, Lisa Desmond & Sowlkid. The video for “Without You” premiered on BET and VEVO in February 2017. Shot in Barbados, this video is cinematic genius that showcases the stunning scenery and dazzling inhabitants of the island. Even more impressive still, Drew Vision Media served as Creative Director, Producer, Director, Casting, Stylist, Location Scout & Choreographer for the shoot.

The video for “Without You” is filled with a brightness and liveliness that transports its viewers to the dream, island vacation of their choice. Along with the eye-catching backdrop, the video co-stars a beyond-breathtaking woman from Barbados. Even next to his stunning counterpart and the comely nature, Drew Vision still pulls your attention to his attractive visage and presence. The message this video portrays is that you have to take the good with the bad, and as long as you embrace it, your life will always be compelling. As the sights shift from views more attractive than the last, Drew Vision is seen embracing life as it comes- whether that be in the form of swimming with giant sea turtles, sharing drinks and laughs with equally attractive people, or just hanging with his woman.

Here at HIP Video Promo, we are excited to give Drew Vision the push he needs to unlock his true star power. For more information please contact Andy Gesner and the HIP Video Promo team at (732)-613-1779 or email us at info@HIPVideoPromo.com. You can also visit www.DrewVision.com for all things Drew Vision.