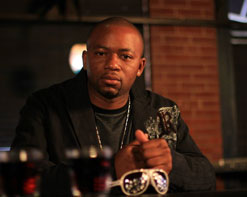 From the album The Beginning, HIP Video Promo staff is pleased to announce the new video for “Party Dream” by the exciting new hip-hop artist, Drifter. His beats send you straight to the sexy sound booth of an underground hip-hop club, and his trancelike rhythm romanticizes the definition of current hip-hop music. His R&B roots are undeniable, and his endearing lyrics make this artist hard to ignore. “Party Dream” is a delight and a savory treat for all of those who are rhythmically inclined.

With a look that comes close to that of the popular Cee Lo Green and a sound that can be compared to Twista’s “Slow Jamz,” Drifter has developed a design of his own that has been crafted through precise definitiveness and direction. Nigel Adams, or most commonly known as Drifter, grew up in Queens, New York, where he discovered his love for music at a young age. He now resides in Elizabethtown, NC and through his dedication towards his love of hip-hop and R&B music, he has brought his own dream to life by creating an independent record label called Paper City Records. Established in 2009, Nigel has been creating music and working with other talented musicians as the Ceo and Owner of the label. Currently, he is working on many new exciting projects that have yet to be released.

In his video for “Party Dream,” we see the sexy and seductive side of Drifter that embodies the soul of himself as an artist. It is set in a dark and sultry nightclub, where beautiful women are getting dressed to meet Drifter himself. Throughout the scenes, you see Drifter romanticizing women and lavishly purchasing drinks for them. The song is incredibly sexy, and the beat entangles you completely. Although it is not set to be a wild song with flashing lights like most clubs contain, “Party Dream” has a seductive lure about each beat that is utterly relaxing and ironically calming. Drifter makes it hard to believe that you’re just listening to a song and that you’re not actually in the club; his lyrics and rhythms are so relative to reality that you are almost fooling yourself.

The hip-hop community has seen a lot of artists that have come and gone, but with someone like Drifter the dedication shines through. Through his success within his active music label, Paper City Records, and his up and coming video for “Party Dreams,” the hip-hop scene is ready to take on every thing Nigel Adams has to offer. He has presented his audience with a combination of skills, and he will amaze and bombard the music scene with his immense talent. Taking hip-hop on by a storm, Drifter will not let you down. For more information please contact Andy Gesner at (732)-613-1779 or email us at info@HIPVideoPromo.com. You can also visit www.PaperCityRecords.com to find out more about Drifter.